Some day, the iPhone will be hard to crack, as Apple is working on various systems to protect the device that accounts for the majority of its revenue. Following a patent that describes an automated screen protector, Apple has patented an iPhone security system that automatically deploys shock absorbers when the device’s built-in sensors detect a potential impact (via AppleInsider).

Dubbed as “Electronic device housing,” the Apple patent describes how the iPhone’s onboard sensors can be configured to monitor the device and detect a drop, for example. When that happens, the patent system triggers spring-loaded shock absorbers, which are part of the device housing. These protectors can be made of foam, plastic, rubber, or another suitable material. 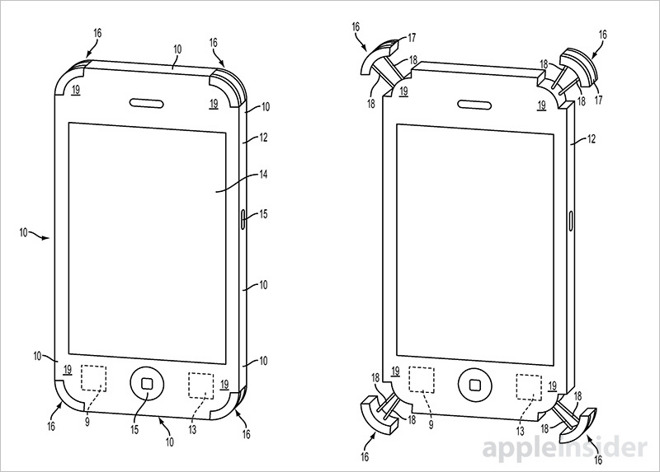 An interesting addition is that these bumper cushions can also help prevent water damage: Since these cushions are placed strategically at the iPhone’s four corners, combined with the accompanying support structures, they can act as water rings.

The document points out that an iPhone might be able to float above a liquid’s surface, though such a scenario would require a perfect combination of bumper support structure extension, positive inherent buoyancy and device orientation. It should be noted that the shock absorber system does not need to deploy in order to function as a float.

The whole protection system sounds interesting, and it would be great to have such protection on the iPhone. However, don’t expect it anytime soon.