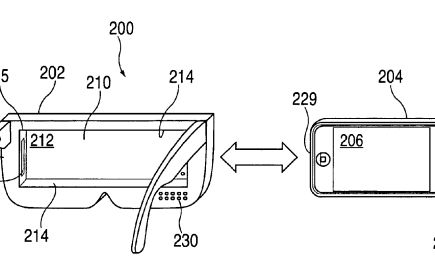 Apple has today been awarded a new patent by the U.S. Patents and Trademark Office (USPTO) titled “Head-mounted display apparatus for retaining a portable electronic device with display”, that hints at a virtual reality iPhone carrying headset, similar to Samsung’s Gear VR or Google’s Cardboard project (via The Guardian). The patent illustrates a set of glasses with a slot for an iPhone, as well as built-in earphones and a wireless remote control the user can hold in their hand while plugged in to the system.

The filing notes that the proposed system avoids the “inconvenient and cumbersome” alternative of connecting a headset to a PC by wires. It must be kept in mind however that the patent doesn’t necessarily mean that Apple is seeking to create a virtual reality device. The Cupertino giant regularly seeks protection for ideas which it has little intention of bringing to market, such as an infrared camera system for iPhones or displays with audio sensors built-in.