In a new post on Loop Ventures website, veteran Apple analyst Gene Munster has shared an in-depth look at the state of Apple Pay, estimating that Apple Pay currently has around 253 million users worldwide, which comes out to 31% of the active iPhone install base. He also noted the percentage of Apple Pay users in the U.S. has decreased to 15% and international has increased to 85%. 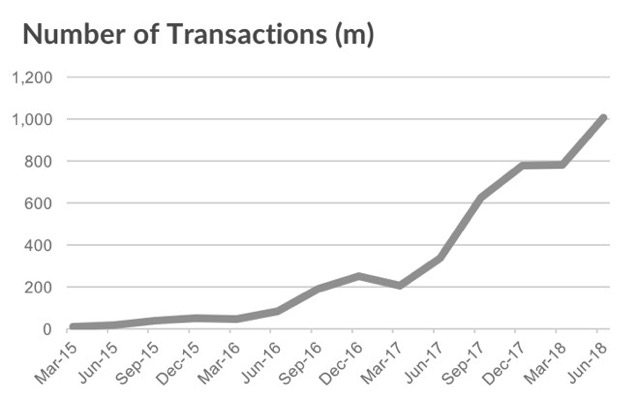 Munster highlighted that Apple has reported year-over-year growth of 500%, 400%, and 300% in Apple Pay transactions in the last three quarters, bringing the total transaction number “well over 1 billion”.

He also pointed out that Apple has started to emphasize Apple Pay more in its advertising for the iPhone, and that the service is gaining traction from its status as the only digital wallet that works with mobile, desktop, in-app, peer to peer, and point of sale.

Apple announced on their most recent earnings call that they now have over 4,900 banks partnered with Apple Pay. We found that since the Dec-16 quarter the total number of banks which have adopted Apple Pay has increased by 1,701. To put that into context, over that same period growth in U.S. & Canada banks increased by 926 (55%), bank adoption in Asia grew by 337 (141%), and adoption in Europe grew by 185 banks (370%).”

Munster, however, believes that Apple Pay is too small to move Apple’s overall Services business, accounting for just 1-2% of its Services revenue.