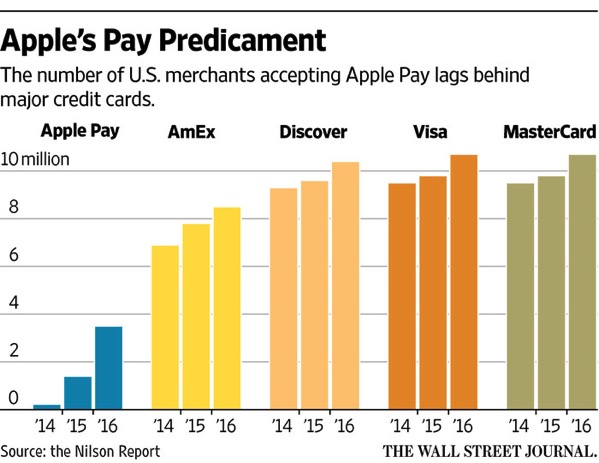 When Apple introduced its mobile payments service in 2014, former Piper Jaffray analyst and now managing partner at Loup Ventures, Gene Munster, expected the company to process $207 billion in transactions by 2016. That compares to his estimate for last year, according to which Apple Pay last year handled $36 billion in transactions, reports the Wall Street Journal.

Apple doesn’t publish Apple Pay figures, so without a single piece of reference data it’s easy to make assumptions, but even Apple agrees that adoption of its mobile payments services has been lower than expected.

Ultimately, there are various factors that contribute to that, with merchant adoption one of them. We know that in the US, for example, the number of contactless point-of-sale terminals is still low compared to Canada and some other markets.

But Apple exec Eddy Cue doesn’t seem to be worried about the results Apple Pay is showing. Speaking with the Wall Street Journal, he said that the service has been adopted faster than the payments systems, and that he believes it will eventually replace cash debit and credit cards.

“Does it matter if we get there in two years, three years [or] five years?” Mr. Cue said in an interview. “Ultimately, no.”

Apple says more than 3,500 banks have so far signed up for Apple Pay, but let’s not forget that the majority of these banks are US-based. And now that Apple is re-negotiating the extension of three-year agreements with banks this year, growth will be a key “feature” of the talks, according to James Wester, a research director at IDC Financial Insights.