We have heard from Whole Foods’ CIO about the popularity of Apple Pay among its customers in just three weeks of availability. Since then, the holiday shopping season has kicked off with Black Friday, considered to be the “Super Bowl of shopping.” How did Apple Pay perform on that day? InfoScout has the details (via NFCWorld).

According to their findings, Apple Pay accounted for less than 5% of all NFC-powered mobile payment transactions. In other words, Apple needs to do some work in order to reach the critical masses, but it is actually on track to do so with another 500 banks joining the platform since the initial announcement.

As it turns out, only 9.1% of US iPhone 6 or iPhone 6 Plus owners have tried Apple Pay when shopping. This number dropped to less than 4.6% on Black Friday simply because the shoppers were unaware of whether the store accepted Apple Pay (31% of the surveyed ones). The second-most cited reason was that they forgot to use it, followed by “I didn’t have my phone handy.” 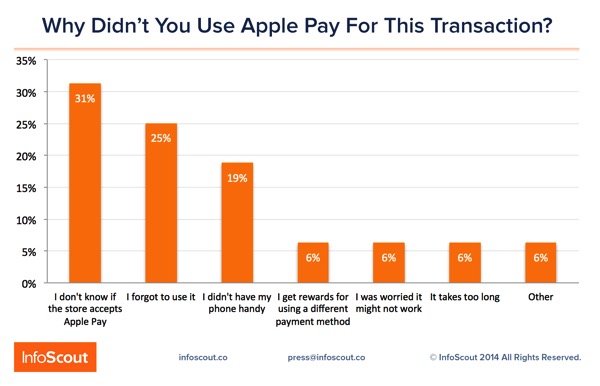 The InfoScout report also analyzes the reasons why 90% of iPhone 6 users didn’t try Apple Pay. As it turns out, the main reason — 32% of the surveyed ones — was that they were not familiar with how Apple Pay works. Another big chunk of iPhone owners are satisfied with their current payment methods, and 19% of the surveyed ones questioned its security.

The report is based on the shopping behavior and opinions of those in InfoScout’s 170,000 household consumer panel who own an iPhone 6 / 6 Plus and shopped at a retail store that accepts Apple Pay this Black Friday weekend.