Moneris says consumer spending in Canada jumped nearly 5 per cent in the third quarter of 2016, according to the same period a year ago, as noted in their quarterly MonerisMetrics report.

The report says spending on credit cards took 65 per cent of transactions, versus 35 percent on debit cards. All provinces showed spending increases, except Alberta, which saw a nearly 3 per cent decline, year-over-year. 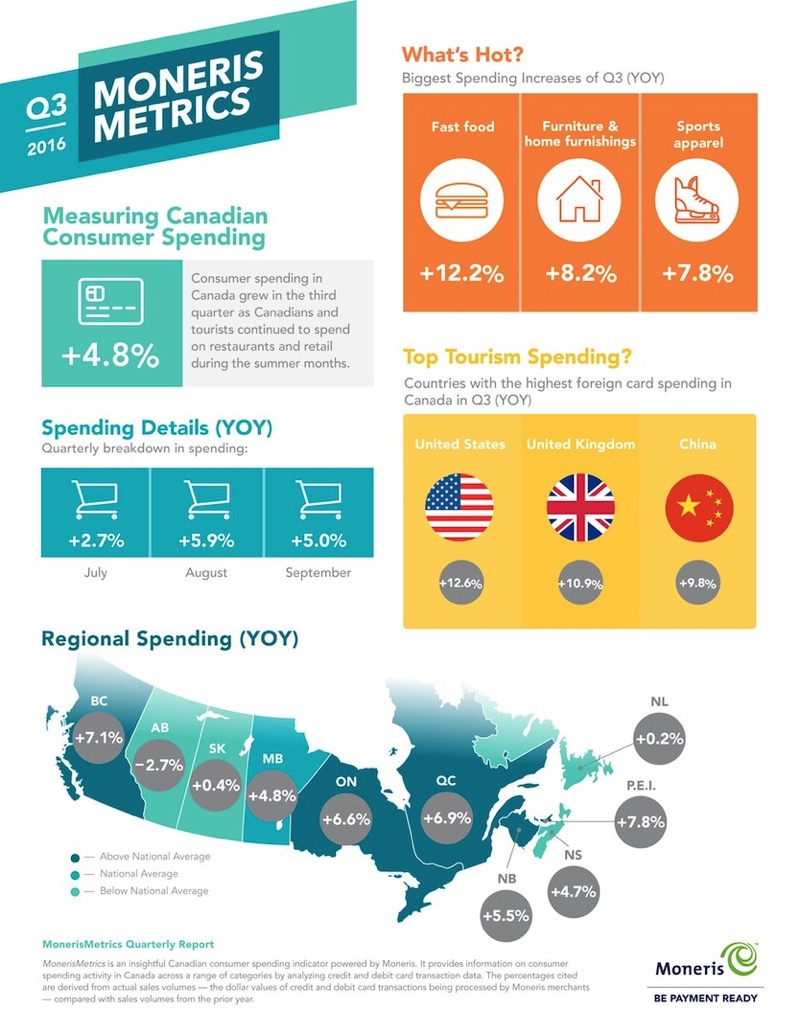 When we take these into the consideration of contactless payments via cards and smartphones with mobile wallets, contactless purchases represented nearly 33 per cent of all transactions in Q3, a massive 85 per cent jump year-over-year. Contactless spending volume surged 145 per cent compared to the same quarter last year.

Angela Brown, President and CEO of Moneris, said in a statement “High growth in the number of contactless transactions being made and volume of dollars spent is indicative of where we are headed with the technology, as more Canadians adopt mobile wallet options such as Apple Pay.”

Canada’s big banks launched Apple Pay support in May and June of this year, which most likely helped drive up those contactless payment numbers for both credit and debit cards. As more and more banks adopt Apple Pay, these numbers will continue to keep climbing.

Have you been using Apple Pay for your daily transactions?

Security researchers from HUMAN’s Satori Threat Intelligence team have identified 75 apps on Google Play and 10 apps on the App Store engaged in ad fraud, resulting in over 13 million installations (via Bleeping Computer). The researchers say they have identified a collection of mobile apps that are part of a new ad fraud campaign named 'Scylla'....
Usman Qureshi
37 mins ago

YouTuber and tech gore creator TechRax took it upon himself to give Apple's new iPhone 14 Pro a facelift in a recent video. "I can't stand the protruding camera bump," he said, preparing to saw it off. The camera island on the back of this year's iPhone 14 Pro models is larger in all directions than the...
Nehal Malik
38 mins ago

According to Bloomberg’s Mark Gurman, he believes Apple may not hold an October event to announce Mac and iPad Pro updates with M2 chips. The M2 chips were unveiled at WWDC this summer. Does Apple have enough new features still hiding to justify holding an October event with the media? “It seems unlikely,” says Gurman. […]
Gary Ng
51 mins ago