In just a handful of days Apple will launch Apple Pay, according to an internal memo addressed to Walgreens and the training materials leaked to 9to5Mac, which reveal that the company is already preparing its retail employees and partners for its mobile payment service.

Users will be able to set up Apple Pay via the Passbook application through both the original iOS 8 setup process or from a new tab in Settings named Passbook and Apple Pay, which is in line with previous reports following the iOS 8.1 beta seed.

As the training material reveals, up to eight credit or debit cards can be added to Apple Pay by scanning the card using the iPhone’s camera. Each card linked to the service will allow the user to access features such as showing a list of transactions, and the ability to receive push notifications, and there will be also services with an option to download the bank’s iOS app.

One of the neat features of Apple Pay is that it will automatically update an expired card with a new expiration date without the hassle of re-entering information. 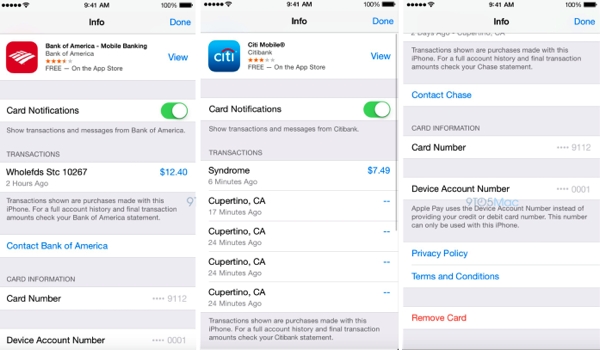 For security reasons, purchases made in an Apple Store won’t display the person’s contact information or credit card number, just the last four digits of a device’s Apple Pay ID. Also, in case customers want to return items, they just need to hold the iPhone near a payment terminal and share the list of their recent transactions.

A little more than a month ago during a media event, Apple said that it would launch Apple Pay, the company’s foray into the mobile payments market in October. As the training materials note, Apple has already launched Apple Pay at its Caffè Macs restaurant in its Infinite Loop headquarters.

Apple Pay will launch shortly in the US – possibly after the iPad event scheduled for this week – after Apple seeds the public version of iOS 8.1. Unfortunately for Canadian users, the mobile payment service will not arrive until sometime next year.