Apple’s Photo Print Products service, which has been integrated into iPhoto since its debut in 2002, is going to be discontinued later this year (via 9to5Mac). The service was moved from iPhotos to the revamped Photos app on the Mac in 2016 and offered simple prints to albums, photo books, and calendars. 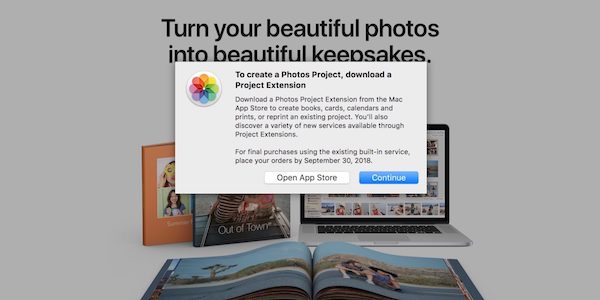 Apple has now decided to stop offering the service, as revealed by a new pop-up message shown to users of macOS 10.13.6 Photos app, which notes that final orders for the Photo Print Products service must be placed by September 30, 2018.

It must be pointed out that in Mojave, the latest version of macOS, Photos app does not include any references to Apple’s built-in photo printing service. In fact, Apple now recommends that customers download a third-party app that includes a Photos Projects extension.

“Apple’s recommendation is that customers download a third-party app that includes a Photos Projects extension. This API was introduced in High Sierra, and allows photo services to integrate photo printing UI inside the Apple Photos app. Payment processing and printing is all handled by the third-party. Services that support Photos Projects include Mimeo Photos, Wix, GoodTimes, WhiteWall and Shutterfly.”

Mojave users can also check out this editorial story on the new Mac App Store for some of the apps offering the service.