According to a new IHS iSuppli report, Apple’s iPhone sales in Q1 propelled it to achieve double-digit growth in the smartphone market, eluding an overall decline in smartphone shipments in the first quarter.

Apple shipped 18.6 million iPhones, up 14.9% (16.2 million a year ago), and their increase was the highest growth among its competitors, with HTC’s growth coming in at second place with 6.2% growth (HTC ranks 5th overall).

One reason for this growth was the introduction of the Verizon iPhone, a new CDMA model.

Nokia’s shipments declined to 24.2 million units from 28.3 million in Q4.
RIM’s shipments rose 4.2% in Q1, through sales outside of North America.

Here’s the chart of the worldwide smartphone leaders: 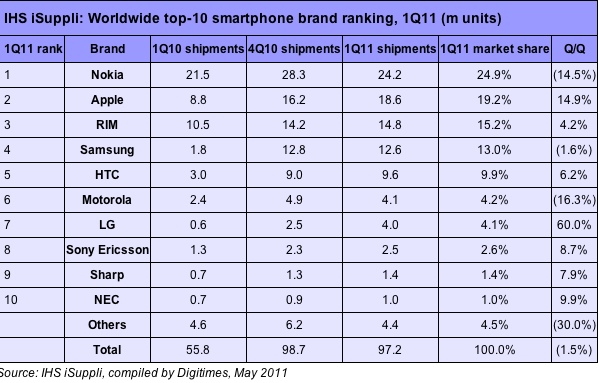 Nokia will soon by surpassed by Apple in terms of smartphone sales. It’ll be interesting to see what Microsoft and Nokia can conjure up–especially now that Microsoft bought Skype for $8.5 billion dollars.