According to a source from BGR, Apple’s policy on the acceptable number of dead pixels was recently updated. The policy guide, seen below, is used as a reference for Apple’s Mac Geniuses when addressing product display problems.

In other words, the guide determines whether or not to replace or repair the affected product.

As seen in the table below, there are a number of acceptable pixel anomalies for each product LCD screen size. As noted in the table, an iPhone with one or more pixel problems is to be repaired or replaced, but an iPad for example can have up to three pixel problems before a repair or replacement is decided.

Interestingly, MacBook and MacBook Pro/Air models can have a combination of up to seven bright/dark pixel problems before the eighth problem issues a repair or replacement.

A good thing to note however is that Apple policy allows Mac Geniuses to offer repair or replacement services if the pixel problems are within acceptable ranges too. For example, if your MacBook has only three pixel problems.

I’m sure glad to know that iPhones seem to have a zero tolerance policy for dead pixels! 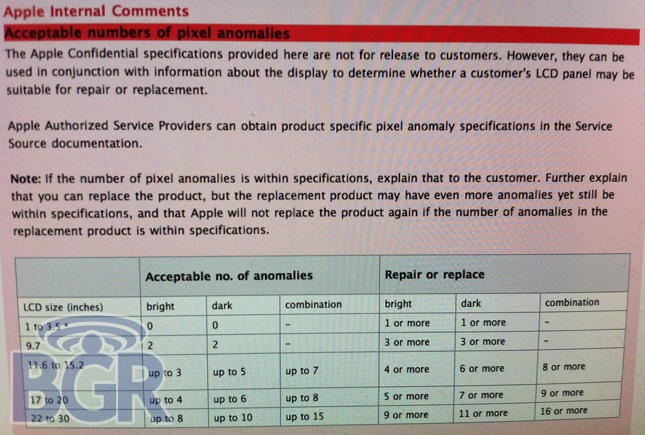