Apple has reported its financial results for the first quarter of its 2010 fiscal year. The numbers are staggering and Apple is now a $50+ billion dollar company. Let’s take a look at some of the numbers, which are based on a new FASB standard for revenue recognition:

With the Apple Event taking place this Wednesday, the “tablet” hoopla is at an all time high. Statements like this by Steve Jobs only adds to the hype:

â€œIf you annualize our quarterly revenue, itâ€™s surprising that Apple is now a $50+ billion company,â€ said Steve Jobs, Appleâ€™s CEO. â€œThe new products we are planning to release this year are very strong, starting this week with a major new product that weâ€™re really excited about.”

Here is a picture of the Yerba Buena building being decked out for Wednesday: 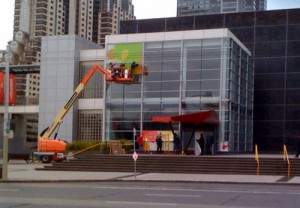 Given that the world economy is still recovering from widespread economic turmoil, it’s pretty impressive that Apple is able to put up such numbers when people are pinching their pennies. I guess I’m not the only sucker for shiny new Apple products, eh? 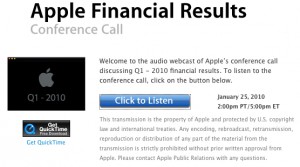