Yesterday Apple announced their Q2 financial results and it turned out to be a pretty good quarter once again. What was interesting about this conference call was Apple cleared up some questions regarding netbook rumors and more. Let’s get onto some details: 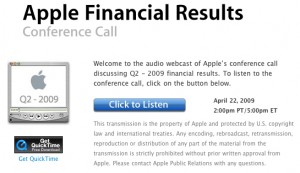 The total number of iPhones and iPod Touch units sold is now at 37 MILLION. Now, just imagine if you created the “next” iPhone App and had 5% of those people purchase your app for 99 cents.

Yes, that is right, you can start thinking about retiring early! 😉 We do know that Apple is going to hit 1 billion app downloads soon…and possibly even early.

Apple continues to remain extremely profitable and they are sitting on a huge amount of cash. This money will help R&D as they continue to pump out devices and computers that we can’t resist buying. Damn you Apple!

“We are extremely pleased to report the best non-holiday quarter revenue and earnings in our history,” said Peter Oppenheimer, Apple’s CFO. “Apple’s financial condition remains very robust, with almost $29 billion in cash and marketable securities on our balance sheet.”

Putting the Netbook Rumors to Rest…?

Apple answered some questions during their Q2 earnings conference. Here are a couple of my favorite questions and answers:

Q: New thoughts on the Netbook at this point?
A: For us it’s about doing great products. When I’m looking at what’s sold in the Netbook market, I see cramped keyboards, junky hardware, very small screen, bad software. Not a consumer experience that we would put the Mac brand on. As it exists today, we’re not interested in nor would it be something customers would be interested in the long term. We are looking at the space.

For those who want a small computer that does browsing/email, they might want an iPhone or iPod Touch. If we find a way to deliver an innovative product that really makes a contribution, we’ll do that. We have some interesting ideas. The product pipeline is fantastic for the Mac. We’ve historically exceeded the market rate of growth, especially given this economy is an extraordinary achievement. These netbook sales are propping up the unit numbers for the industry. We are very pleased with our performance.

Q: Update on Steve Jobs?
A: We look forward to Steve returning to Apple at the end of June.

Steve Jobs Could Be Returning to Announce the “Next” iPhone

So it looks like Steve Jobs is going to be returning! But according to their answer they said at the end of June. That leaves out the possibility of my father being the keynote speaker at the 2009 WWDC since it starts in the beginning of June. Hmm…could Steve’s return at the end of June coincide with the launch of iPhone OS 3.0 and possibly the iPhone 4G?

I’m pretty amazed that while it seems like the world economy is crumbling left, right and center, Apple continues to make profits! Recession? What recession?! Maybe people are putting themselves out of their misery by purchasing iPods and iPhones to get through these tough times. Nice work Apple. 🙂 You guys own any shares of AAPL?

Click here to listen to the entire Q2 conference call.

Netflix Canada has released its list of new shows and movies coming in October 2022. For Netflix Games, there are now up to 28 free games on iOS and Android. Coming soon games include: Nailed It! Baking Bash; Spiritfarer; and Hello Kitty Happiness Parade. Check out the list of what’s coming to Netflix Canada in October 2022, […]
Gary Ng
4 hours ago

With the release of iOS 16, Apple has introduced the ability to change how your iPhone keyboard sounds or vibrates when you are typing, including the option to enable haptic feedback. However, in a newly published support document, Apple has revealed that turning on keyboard haptics might affect the battery life of your iPhone, as spotted...
Usman Qureshi
8 hours ago

According to analysts at JP Morgan, Apple is preparing to make India and Vietnam its key global manufacturing hubs as the company continues to cut its reliance on China, TechCrunch is reporting. In a note to clients sent out this week, the analyst claimed that the Cupertino company will move 5% of global iPhone 14...
Usman Qureshi
8 hours ago