What the Analysts Are Saying About Apple’s Q4 2015 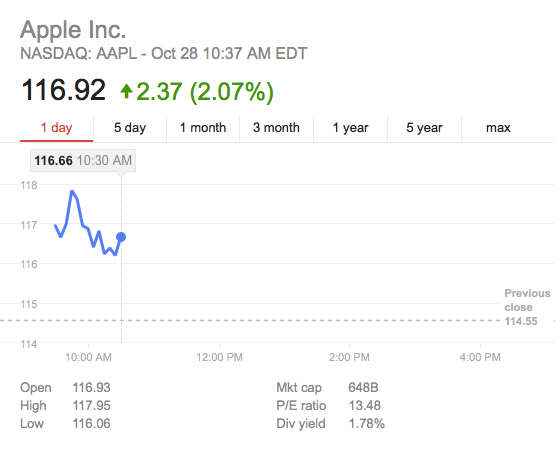 Apple closed its fiscal year with record iPhone sales – 48 million units – in line with the Wall Street consensus, pushing stock price up as analysts appear happy with the numbers they got yesterday. As usual, following the earnings call, analysts send a note to investors rating the Apple stock. We’ve picked a few from the notes spotted by Fortune’s Philip Elmer-DeWitt.

Daniel Ives of FBR says yesterday’s report was better than expected and points to Tim Cook’s forecast of year-over-year iPhone unit growth for the December quarter. Although it will be hard to match Apple’s Q1 2015 sales – 74.5 million units sold in just three months – Apple is positive the guidance suggests. And Gene Munster of Piper Jaffray adds that the company guided December 2015 revenue to between $75.5 and $77.5 billion vs. the Street’s $76.8 billion and his expectation for guidance of $74 billion.

In his note to investors, Walter Piecyk of BTIG emphasizes that Apple’s growth story remains intact, silencing earlier concerns. As revealed in the earnings report, sales in China continue to grow – 120% during the September quarter.

iPhone remains the name of the earnings game, says Katy Huberty of Morgan Stanley. She highlights the factors driving iPhone sales: (1) a strong position in emerging markets such as China, (2) continued upgrade cycle and 69% of users yet to upgrade to larger screens, (3) record Android switchers, and (4) an increase in average selling price.