According to a recent report by IHS iSuppli (via Digitimes) as part of their Semiconductor Spend Analysis H1 2012, Apple has again retained their rank as the world’s top purchaser of semiconductors, buying at a faster rate than its competitors. Apple is expected to purchase close to $28 billion in semiconductors, an increase of 15% compared to the $24 billion spent a year ago, outperforming rival Samsung. With this much buying power, Apple has earned the right to dominate electronics supply chains:

“It’s well known that Apple has already conquered the smartphone and tablet segments—but behind the scenes the company is engaging in another kind of conquest: the dominance of the electronics supply chain,” said Myson Robles-Bruce, senior analyst for semiconductor spending and design activity at IHS. “Such a dominant position provides critical benefits, allowing one to dictate semiconductor pricing, control product roadmaps and obtain guaranteed supply and delivery. For Apple, these benefits translate into competitive advantages, letting it offer more advanced products at lower prices, faster and more reliably than the competition.” 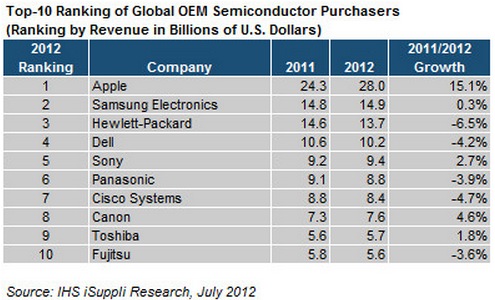 It has long been speculated Apple leverages its cash stockpile towards its supply chain, enabling the company to maneuver deals unattainable by rivals for its own advantage.

Apple’s growth in chip spending is expected to be larger than any OEM among the globe’s top 10 semiconductor buyers. Its increase is predicted to be three times the next fastest growing purchaser, Canon, set to expect a 4.6% growth this year. Areas where Apple is seen as having the fastest growth include the Americas and EMEA (Middle East and Africa). In the Asia-Pacific region, Apple is seen to rank second, and only in Japan was the company not among purchasers of high-growth.

Of the four major electronics production regions, Apple is expected to achieve the fastest growth in semiconductor purchasing among the Top 10 OEMs in two areas: the Americas and EMEA (Middle East and Africa). Apple is set to attain the second fastest-growth in a third geography, the key Asia-Pacific region, which now is the world’s dominant electronics producer. Only in Japan was Apple not among the fastest-growing chip purchasers in terms of growth.

In the Americas, Apple ranks second behind Cisco (their semiconductor buying decreased 5% in 2012) but is quickly closing in on its rival, as a $1 billion gap remains.

As for the future, Apple’s semiconductor purchasing growth is predicted to further rise in 2013 at a rate of 12.3%, once again leading the pack. Apple’s recent 2012 Q3 earnings reported this week noted $35 billion in revenue, with 26 million iPhones and 17 million iPads sold.

Just the other day, research firm Gartner concluded in a similar report (via MacRumors) Apple had ranked as the world’s top semiconductor purchaser, based on the metric of ‘Design TAM’, the total silicon content found in its product lines.