According to Newsweek’s 2012 Green Rankings for U.S. companies, Apple ranks in the 112th spot. Newsweek explains their methodology in determining the ranks of companies:

To produce the 2012 Green Rankings, Newsweek collaborated with leading environmental research providers, Trucost and Sustainalytics, to assess each company’s environmental footprint, management of that footprint, and transparency.

Although Apple touts their environmental and green initiatives better than most companies, according to Newsweek’s methodology the Cupertino giant doesn’t fare very well. For 2012, Apple’s U.S. ranking is 118th, a decline of 68 spots since 2011.

The reason for the decline is Apple’s decision to avoid public reporting via the Carbon Disclosure Project (CDP), an “independent not-for-profit organization working to drive greenhouse gas emissions reduction and sustainable water use by business and cities.”

Apple’s Green Score took a hit this year due to the company’s resistance to participating in public reporting via the Carbon Disclosure Project (CDP) for the second straight year. The CDP is a leading environmental nonprofit that publicly surveys the world’s largest companies on their greenhouse-gas emissions, management systems, and reduction targets. 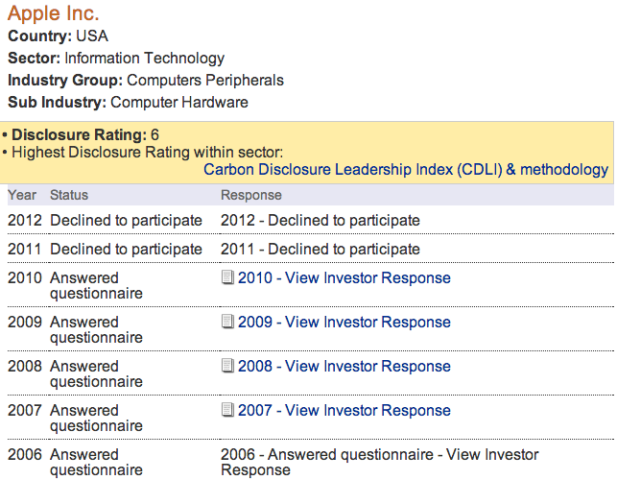 The survey is not short by any standards and in 2010 Apple made it clear they are as transparent as any company can get when it comes to reporting environmental and green standards. At the end of the survey their response is the following under ‘Further Information’:

Apple reports detailed information about the emissions of our facilities, which only account for 3 percent of the company’s carbon footprint. Over 97 percent of Apple’s carbon footprint comes from the products we make. It is for this reason that Apple provides customers with estimates of the greenhouse gas emissions generated by each new product we introduce. It’s a level of detail no other electronics company provides, but we think they should. Apple will continue to report on the products that we make so that customers can track our progress in reducing carbon emissions each time a new product is introduced. All Product Environmental Reports for Mac, iPhone, iPod, Server and Display products can be accessed from http://www.apple.com/environment/reports/ Apple reports the emissions of the company’s facilities annually. Apple’s facility report can be found on the company’s website at: http://images.apple.com/environment/resources/pdf/FacilitiesReport2008.pdf. A summary of all emissions covering Scope 1, 2 and 3 activities can be found here http://www.apple.com/environment/ The GRI reporting index for the associated Apple Environmental reports can be found here http://www.apple.com/environment/reports/gri-index.html Apple reports the company’s Supplier Responsibility Progress annually, which can be found on the company’s website at: http://images.apple.com/supplierresponsibility/pdf/SR_2009_Progress_Report.pdf.

Apple is not alone in declining to participate in the CDP. According to Environmental Leader, the world’s top non-responders include the likes of Amazon and even RBC:

It’s clear Apple has their own initiatives for reporting their responsibility to the environment. Back in February, Apple released its 2012 Environmental Update that revealed the company’s plans to use massive solar arrays to power its data centres. Just recently, the company also released its environmental report for the new iPad mini, just one of many individual reports for its product line up.