Apple Reduces iAd Rates Even Further By Up to 70% 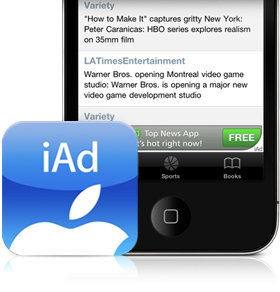 Apple has been hugely successful with their iPhone and iPad sales, but their advertising platform iAds has failed to make a dent in the industry. Introduced by Steve Jobs last year as part of iOS 4.0, iAds had it rates cut in half back in February of this year, and now according to Bloomberg they’ve been reduced even further.

Apple Inc. (AAPL)â€™s iAd mobile-advertising business has cut rates by as much as 70 percent as some marquee clients are using rival services, two people with knowledge of the matter said, signaling the company is struggling to parlay its technology leadership into success in the ad industry.

When Apple rolled out iAd a year ago, companies such as Citigroup Inc. (C) and J.C. Penney Co. were being charged $1 million or more to run ad campaigns. Today those brands arenâ€™t using iAd, and Apple is offering packages for as little as $300,000, said the people, who asked not to be named because the rates are private.

It appears the initial advertising costs for iAds have not panned out for Apple. The opportunity to target over 200 million iOS users is too expensive and companies are exploring their options for mobile advertising. Not only that, we haven’t heard of developers making big bucks from showing iAds within their apps.

Apple even released an app to showcase apps, iAd Gallery. So far, the platform isn’t available in Canada, only showing a blank ‘test ad’ for Canadian IP addresses.

Ookla has analyzed fresh data from Q3 2022 for SpaceX’s Starlink, HughesNet, and Viasat in North and South America, in the Speedtest company's ongoing series on satellite internet. According to the data, Starlink download speeds dropped in Canada by at least 14% and the U.S. by nearly 17% from Q2 to Q3 2022, while speeds...
Usman Qureshi
12 mins ago

Google has started serving a new pop-up to YouTube users in Canada to help raise awareness for Bill C-11 (aka the Online Streaming Act), which could have significant implications for online streaming platforms and the Canadians who use them. "Your YouTube feed is uniquely yours. Bill C-11 could change that," the alert reads. The Liberal government...
Nehal Malik
34 mins ago