Apple Canada’s certified refurbished online store has finally stocked the 16GB 5th generation iPod touch for the first time (that we’re aware of), now available for $189 ($40 off its new price of $229, 17% off) and available to ship in 30 business days (of course that could change): 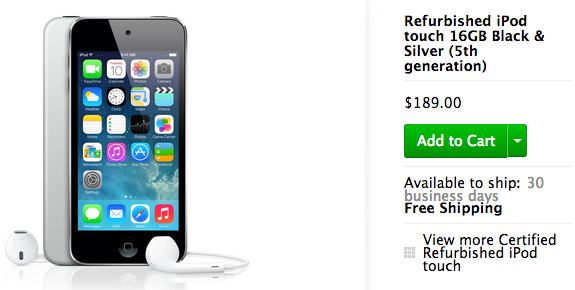 This iPod touch was quietly unveiled online in late May 2013 (to replace the older fourth generation model) and is powered by Apple’s A5 processor, has a Lightning adapter and comes with EarPods.

What’s interesting is this model does not come with an iSight camera or loop attachment, like its older 32GB and 64GB siblings.

This model will support iOS 8 when it debuts this fall. If you’re looking for a cheaper iPod touch for the kiddies (or you’re a developer), this might be the one to get.

Refurbished iPods come with a new battery and outer shell and include a one year warranty. Let us know if you’re going to jump on this!