Apple Rejects Horoscope App ‘WTFuture’ for Being Form of Spam 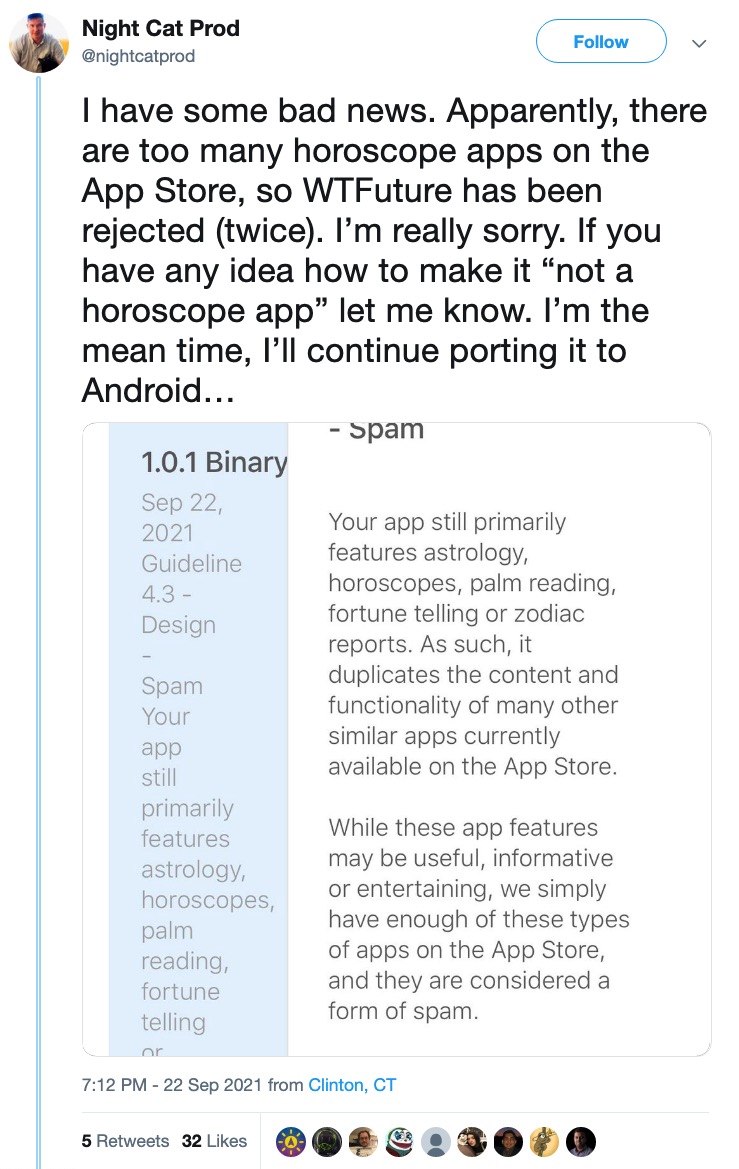 According to a now-deleted tweet from app developer Night Cat Productions (@nightcatprod), Apple rejected the horoscope app they spent a year working on, WTFuture, from admission into the App Store twice for being “spam” (via Reddit).

The second time they submitted WTFuture for App Review, Apple rejected the app, citing section 4.3 of its Developer Guidelines and saying:

Your app still primarily features astrology, horoscopes, palm reading, fortune telling or zodiac reports. As such, it duplicates the content and functionality of many other similar app currently available on the App Store.

While these app features may be useful, informative or entertaining, we simply have enough of these types of apps on the App Store, and they are considered a form of spam.

While it is true that there is no scarcity of horoscope apps on the App Store, the developer argued that a number of those apps haven’t been updated in years, but Apple hasn’t removed them to make space for new ones.

A couple of apps that the developer singled out to Apple hadn’t even filled out the new privacy labels Apple requires all app developers to furnish.

The developer was disappointed about a year’s worth of their work going to waste, and noted that there’s no application process when you start developing an app or guarantee that it will end up on the App Store.

All Apple gives developers are a host of guidelines to adhere to while creating apps, and section 4.3 of those guidelines clearly states:

Also avoid piling on to a category that is already saturated; the App Store has enough fart, burp, flashlight, fortune telling, dating, drinking games, and Kama Sutra apps, etc. already. We will reject these apps unless they provide a unique, high-quality experience.

Night Cat Productions has said they will now focus on developing WTFuture for Android.

Earlier in the year, Apple went on a much-needed tirade against rip-off apps with “irrationally high” prices being submitted for App Review. Take a look at Apple’s top ten reasons for rejecting apps from the App Store.

Oreo is launching its very first Metaverse experience later this month in Canada. On January 30th, Oreo is launching its new limited-edition cookie, ‘The Most Oreo’ as well as an interactive digital Oreoverse world. The Oreoverse is said to incorporate multiple levels of “cookie-themed games” where players have a chance to win prizes. Of the...
Steve Vegvari
3 hours ago

Today, Xbox and Bethesda are hosting their Developer_Direct stream. The first digital showcase of the year from Xbox is said to provide new information and gameplay for a handful of anticipated games arriving on Xbox, PC, and Xbox Game Pass. Xbox announced the Developer_Direct earlier this month. Setting expectations accordingly, fans can expect to hear...
Steve Vegvari
4 hours ago