Apple has released iOS 5 GM seed to developers, as promised today within their ‘Let’s Talk iPhone’ media event, where they introduced the new iPhone 4S. Check developer centre for the download.

Here are some notes we received: 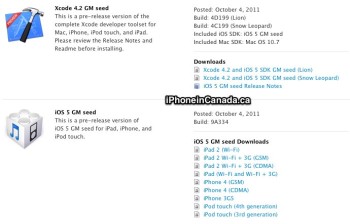 iOS 5 will be released on October 12th.