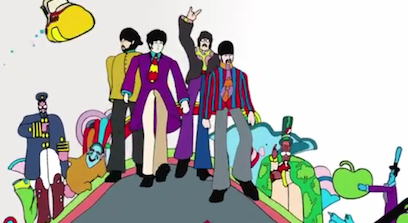 Yesterday we were first to report on the free animated book download, The Beatles Yellow Submarine in the iBookstore. Today, a press release was issued to make it official, and this evening Apple has uploaded a new iTunes TV ad to its YouTube account called ‘Covers’, featuring The Beatles:

Let iTunes take you on a journey through The Beatles, from Please, Please Me, all the way to Abbey Road.

The song Magical Mystery Tour (released in 1967) is the background music:

The Beatles finally made it into iTunes last November, after a decades long trademark dispute over the name of Apple Computer, as it infringed on the holding company of the British band, named Apple Corps. Of course, it was Steve Jobs that helped orchestrate the package involved with The Beatles in iTunes, that eventually sold over 5 million songs and 1 million albums in two months time.