Apple is known to rely on suppliers with big names like Taiwan-based Foxconn, a company that employs more than a million workers who assemble everything from MacBooks to iPads. But now, it seems that Apple is relying on off-the-radar Taiwanese companies like Ta Liang, to figure out hard-to-solve production problems and meet strong demand for its new products like the iPhone 5, as highlighted in an article by the Mercury News. 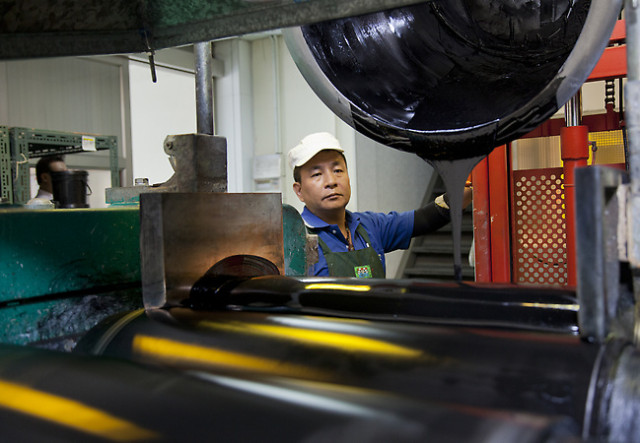 With Taiwan at the center of the Apple manufacturing ecosystem, it is the company’s massive supply chain is what enabled the record-breaking rollout of iPhone 5 selling 5 million units by the end of the first weekend. Creative Strategies President Tim Bajarin says “Apple’s supply network is perhaps the most sophisticated in the world”. But even that highly sophisticated system has been strained by the high demand for the iPhone 5.

Kinks along the global supply chain caused Apple to delay its original delivery dates for pre-ordered phones and many retailers ran out of iPhone 5s to sell in the days after the launch. Apple CEO Tim Cook promised in a news release to smooth things out, asking everyone for patience and vowing that the company is “working hard to build enough iPhone 5s for everyone.”

However, working with Apple as a supplier is not easy, says Stephen Su, general director of Taiwan’s Industrial Technology Research Institute. Small suppliers like Ta Liang are handed flexible, folding panels and are told to make them without the slightest rough edge or blemish.

“That made it almost impossible,” recalled Jerry Chen, president of the 325-employee-company, which builds sophisticated machines weighing 12 tons each that are used to create tech components such as circuit boards for iPhones and other devices. A week later, however, Chen invited the Apple rep back for another coffee — and the proud unveiling of a machine that had been configured to seamlessly make the cuts Apple wanted.

“We took him to our factory to see the production,” Chen said. “He used his hand to check out the cut. ‘Oh, wonderful!’ he said.”

Apple is reported to be relying on on 156 official product and components suppliers, a number that doesn’t include companies like Ta Liang, which says about 20 percent of its business is derived from building sophisticated factory machines that produce Apple products.

Apple announced this week its Maps team will be driving and walking across six Canadian cities next week. The Apple Maps team will be in Toronto, Montreal, Calgary, Vancouver, Edmonton and Ottawa from Monday, August 8, 2022. Apple says they will be “driving vehicles and wearing specialized backpacks with equipment to help us build the...
Gary Ng
29 mins ago