The Telegraph reports sources say Apple is expected to introduce a new improved version of AirPlay, possibly dubbed ‘AirPlay Direct’ that will allow for streaming of music from one device to speakers without a WiFi network:

The new version will require just speakers or a hifi and an iDevice; the iPhone, iPod or iPad would form its own network to allow a direct connection and music playback.

The move is expected to be announced at the launch of the new iPhone, which is widely rumoured to take place on September 12.

Sources said that Apple has not signed off any specific products yet and that the ‘Airplay Direct’ is a working title rather than a definite name.

The story also notes a smaller dock connector will also be announced, to further encourage AirPlay streaming for future speakers and eliminate the need for a dock connection.

AirPlay lets you stream music throughout your entire house — wirelessly. AirPlay wireless technology will be fully integrated into speaker docks, AV receivers, and stereo systems from companies such as Bowers & Wilkins and Denon. So you can enjoy your entire iTunes library — every song and every playlist — in any room and anytime. 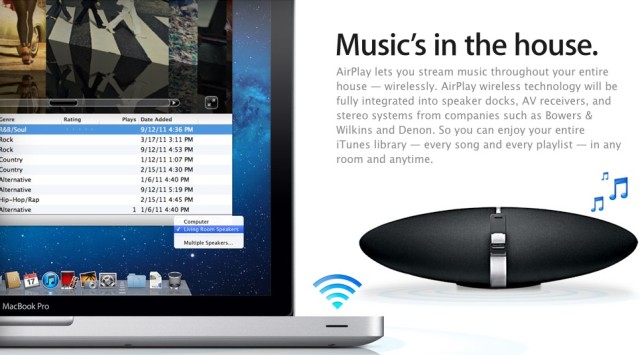 If this updated version of AirPlay emerges at Apple’s September 12th iPhone announcement, it will probably add the option of Bluetooth to stream music on top of WiFi.