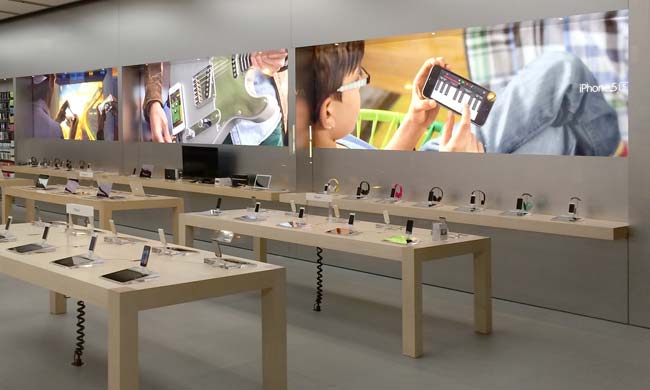 Apple is installing new back-lit wall graphics at its retail stores to promote the capabilities of the iPad and iPhone. According to ifo Apple Store, the visual teams at Apple stores are actually “changing the mood of the stores” with their new photographic style, featuring richer colors, tone and brightness as commonly seen in magazines.

“The new graphics were photographed like magazine ads, showing the iPad/iPhone being used in actual situations, complete with their surrounding people and places. Their colors, tone and brightness is much richer and darker than the previous graphics, a noticeable difference that’s been the subject of Tweets and other on-line postings by store employees and visitors.”

Previously, the wall graphics at Apple retail stores were stylized close-ups of products with lots of bright colors and white space that spilled over into the stores. The new graphics however are based on the latest series of videos that promote the iOS devices and its real-world capabilities.

Apple’s upcoming “M2 Max” chip was once again spotted on Geekbench's database on Thursday, this time indicating a more respectable jump in performance as compared to its predecessor, the M1 Max. Last week, the M2 Max chip showed up on Geekbench with a single-core score of 1,853 and a multi-core score of 13,855. The M1...
Nehal Malik
51 mins ago