Apple Reviewing Qualcomm LTE Chip for the Next iPhone 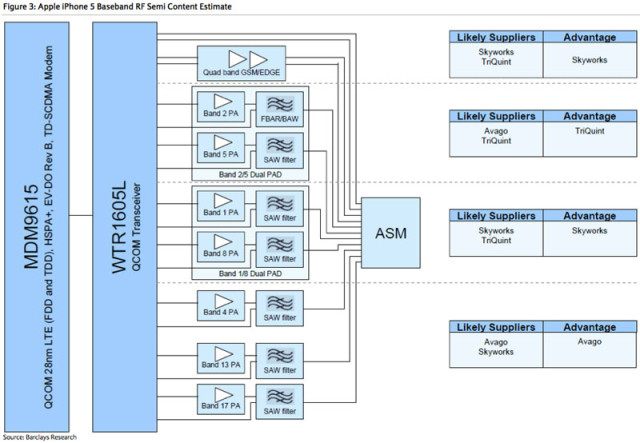 AppleInsider is reporting that they have received a report from Barclay’s that indicates Apple is indeed testing 4G/LTE chips for the next iPhone, expected to launch this fall. With the new iPad being shipped with 4G/LTE on board, it’s pretty much a sure thing that the next iPhone will ship with the same.

The chip being reviewed in the report is Qualcomm’s “MDM9615” LTE chip. It supports both voice and data over LTE, unlike the Qualcomm chip in the new iPad that only supports data. The report also suggests that the next iPhone will be a “world” device, supporting many different bands around the world from GSM/EDGE, 3G, and 4G/LTE networks. This is unlike the new iPad, which shipped in 2 different 4G/LTE models, one for AT&T and another for Verizon.

As you can see in the image above, it would seem there are three potential suppliers that could ship the new chips to Apple, but Barclay’s suggests that Skyworks may come out on top to be the primary supplier. It is expected to cost Apple an extra $3-$10 to upgrade the internal radio from 3G to 4G/LTE.

All rumours aside, I would be very surprised of the next iPhone did NOT support 4G/LTE. Most carriers are ready, or on there way to being ready for 4G, and most devices competing with the iPhone already support this new mobile standard.

According to a report by The Intercept, Apple is using Chinese company Tencent’s blacklist to block access to certain websites via Safari in Hong Kong. Last month, Apple users in Hong Kong trying to access the code-sharing website GitLab were presented with a warning that says the website is being blocked for their own safety. Safari’s “safe...
Usman Qureshi
53 mins ago