If you’re a Best Buy Reward Zone member (the company’s free loyalty program), you will be eligible to buy some Apple products on sale this weekend from July 17-19.

While discounts aren’t mind-blowing, they are still savings on Apple products. Typical discounts include $150 off the latest MacBook Pro, while the 16GB Wi-Fi iPad Air is available for $449, a savings of $50.

Bring this coupon with you in-store for the ‘exclusive Apple Event’ to see what you can save on. Again, the savings won’t blow you away but if you’re about to buy a new MacBook or iPad this weekend, you might as well save a few bucks. 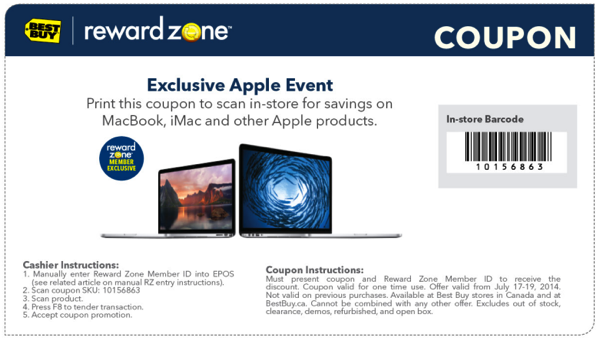 Let us know what you pick up or find at Best Buy!