Apple has lost market share during the past quarter compared to the same period a year ago, but sales nevertheless grew by 16.1%, as it has shipped 39.3 million iPhones between July and September 2014, compared to 33.8 million reported for the same period in 2013. 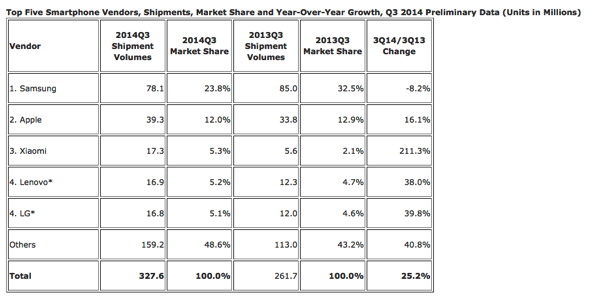 A driving force behind the record smartphone volume was the combined effort of the vendors trailing market leaders Samsung and Apple. “The next three vendors – Xiaomi, Lenovo, and LG Electronics – all posted market-beating growth and with markedly different strategies,” said Ramon Llamas, Research Manager with IDC’s Mobile Phone team. “This shows that there is still room to compete in this market, whether it be in the low end as Lenovo has done, at the high end where Xiaomi competes, or in both as LG Electronics has shown. Beyond the top five, there are a number of other vendors achieving similar results.”

International Data Corporation (IDC) report is out and offers a cross-sectional view of the smartphone market: shipments exceeded 300 million units for the second consecutive quarter, recording 25.2% growth compared to the same period a year ago. 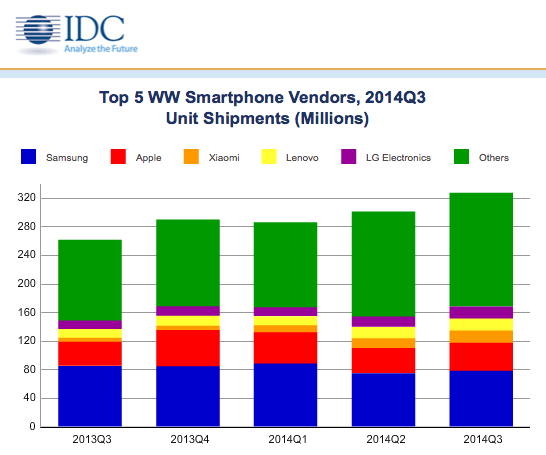 That Samsung remained the uncrowned king of the smartphone market isn’t new. What is noteworthy, however, is Xiaomi’s performance during the past quarter: it grew 211.3% as it shipped 17.3 million units in Q3 2014 compared to only 5.6 million reported for the same period last year.