A recent publication by AllThingsD highlights Apple’s argument in the ongoing patents war with Samsung Electronics that the Korean tech giant deliberately copied iPhone’s and iPad’s iconic designs as well as their intuitive user interfaces, even though Google warned the company about great similarity in design of Galaxy S and Galaxy Tab with respective iOS devices. Apple further claims that Samsung was well aware of the striking resemblance and that the issue was one the company discussed internally. 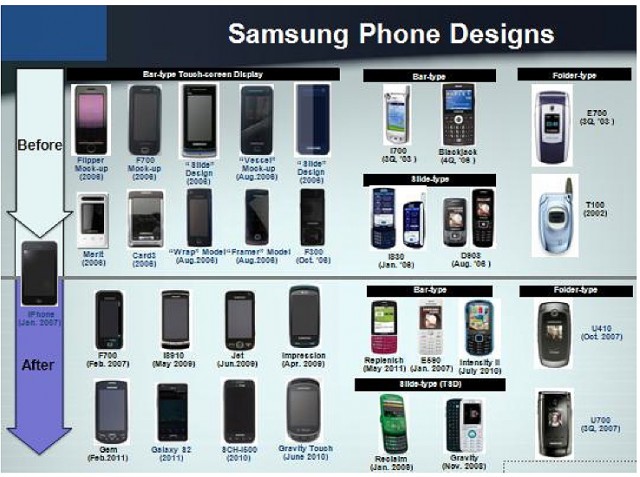 “Samsung’s documents show the similarity of Samsung’s products is no accident or, as Samsung would have it, a ‘natural evolution,’” Apple argues in its brief. “Rather, it results from Samsung’s deliberate plan to free-ride on the iPhone’s and iPad’s extraordinary success by copying their iconic designs and intuitive user interface. Apple will rely on Samsung’s own documents, which tell an unambiguous story.”

Among those documents are a few purported to show that Samsung not only deliberately copied certain characteristics of the iPhone and iPad, but was also explicitily warned away from doing so by various third parties, including Google.

The report also samples some of Apple’s more compelling points:

Both companies are scheduled to go to trial on July 30th, an event being quoted by some as the “patent trial of the century”.