It looks like Apple is taking a stance to get the PR machine rolling to denounce jailbreaking your iPhone. News broke yesterday that Apple has submitted documents to the US Copyright Office stating that jailbreaking our iPhones is DMCA violation and copyright infringement, which essentially makes it illegal. This was posted on the website of the Electronic Frontier Foundation.

Apple is saying that 3rd party apps, such as those available through Cydia and Installer require modified versions of Apple’s software which in turn constitutes infringement on copyrights. Here’s a blurb from the EFF website on this matter:

As part of the 2009 DMCA rulemaking, EFF has asked the Copyright Office to recognize an exemption to the DMCA to permit jailbreaking in order to allow iPhone owners to use their phones with applications that are not available from Apple’s store (e.g., turn-by-turn directions, using the iPhone camera for video, laptop tethering).

Apple’s copyright infringement claim starts with the observation that jailbroken iPhones depend on modified versions of Apple’s bootloader and operating system software. True enough — we said as much in our technical white paper describing the jailbreak process. But the courts have long recognized that copying software while reverse engineering is a fair use when done for purposes of fostering interoperability with independently created software, a body of law that Apple conveniently fails to mention.

Hmm…so does this mean the moment you jailbreak your iPhone, a representative of Apple will show up at your doorsteps with the newest iTaser? Sure, Apple claims it’s illegal to jailbreak but there is no way they can control what you do in your own home. Unless they somehow can detect jailbroken software and somehow lock your iPhone using the internet, but of course that is highly unlikely.

So if you want to jailbreak your iPhone, just find a dark corner in your room, turn off the lights and don’t tell anybody what you’re doing. Are you scared yet? 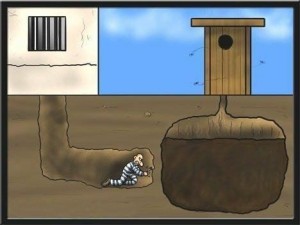 Click here to check out the full PDF on this issue.