Apple Scores The Highest Reputation Quotient® Ever Achieved By A Firm

According to a new corporate study by Harris Poll (via TechCrunch), Apple has scored a Reputation Quotient® (RQ) of 85.63 which is the highest ever achieved by any firm. Harris Poll RQ is basically a survey which measures corporate reputation for brands and companies in the U.S. Apple’s RQ displaces Google’s second-ranked score of 82.82 with only 8 companies ever crossing an RQ score of 80 or above which denotes “excellent reputation”. Strangely, Facebook has not even appeared on the list this year at all. 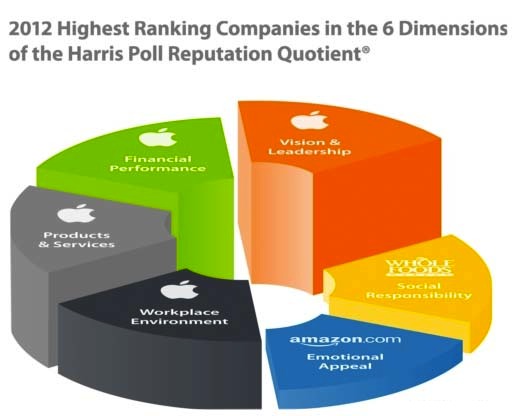 Apple’s current dominance is built on strong investments in its brand, predominantly through its products and services. This one-dimensional approach to building reputation has ultimately yielded high associations with all six reputational dimensions. Conversely, Hewlett Packard, which once out-ranked Apple, has headed in the reverse direction. Hewlett Packard’s slowly eroding reputation has been injured by negative perceptions on Ethics and Vision & Leadership dimensions, and its brand is beginning to feel the damage.

Among the top 5 rankings, Coca-Cola is at #3, Amazon is at #4 and Kraft Foods, the multinational confectionery, food and beverage conglomerate is at #5.