IDC has released their worldwide mobile phone and smartphone marketshare numbers for Q2 2013, and Apple showed moderate growth, its second-lowest year-over-year iPhone growth rate in nearly four years. The reason? iPhone buyers usually hold off on purchasing phones as they anticipate new models in the fall.

Nonetheless, the 31.2 million iPhones Apple shipped last quarter was impressive as its flagship iPhone 5 model, which has been in the market for three quarters, was faced with additional global competition in the form of Samsung’s Galaxy S4 and HTC’s critically-acclaimed One models. Apple’s growth is likely to accelerate globally assuming it launches a lower-cost iPhone and continues to penetrate prepaid markets in the quarters to come.

Looking at the chart below for smartphone shipments (note only Apple shares its actual sales numbers, not just shipments), Apple saw 13.1% smartphone marketshare, with a year-over-year change of a moderate 20%, which is well below the changes compared to Samsung or smaller rivals such as LG or Lenovo. Samsung has almost a third of smartphone marketshare, which was attained by releasing as many models as possible. 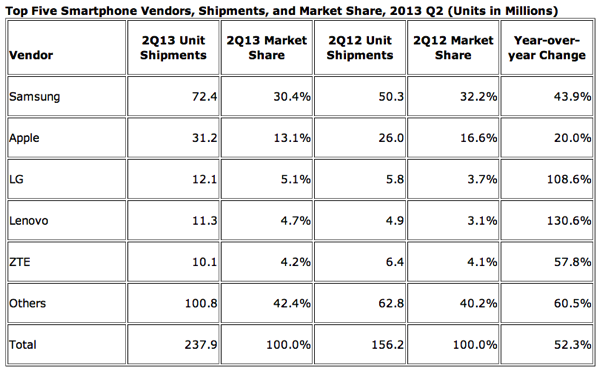 When it comes to mobile phone marketshare (mostly dumb phones), Apple is in third place at 7.2%, behind Nokia and Samsung. The company showed a 20% year-over-year change which outpaced Samsung. 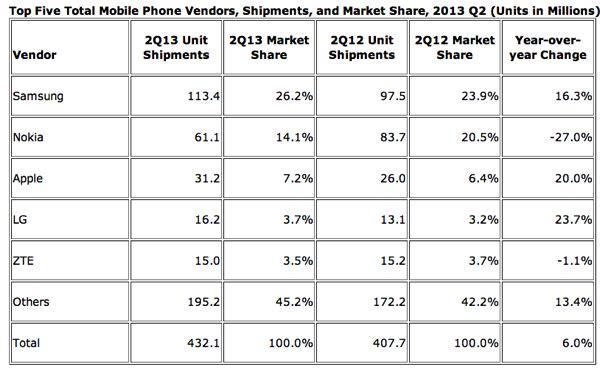 Do note these numbers are based on Apple selling only its premium iPhone, but IDC suggests should a rumoured budget model debut in the fall, it will affect the company’s marketshare in developing markets and allow it to gain a foothold.