Apple Seeking Engineers for its Next Generation Payment Platform

A new job listing posted on Apple’s website reveals the company is working on a new payment platform, that will “push the boundaries in new markets for Apple Retail”, According to 9to5Mac, Apple is looking to hire a Payments Software Engineer that will help “build a next generation payment platform”. 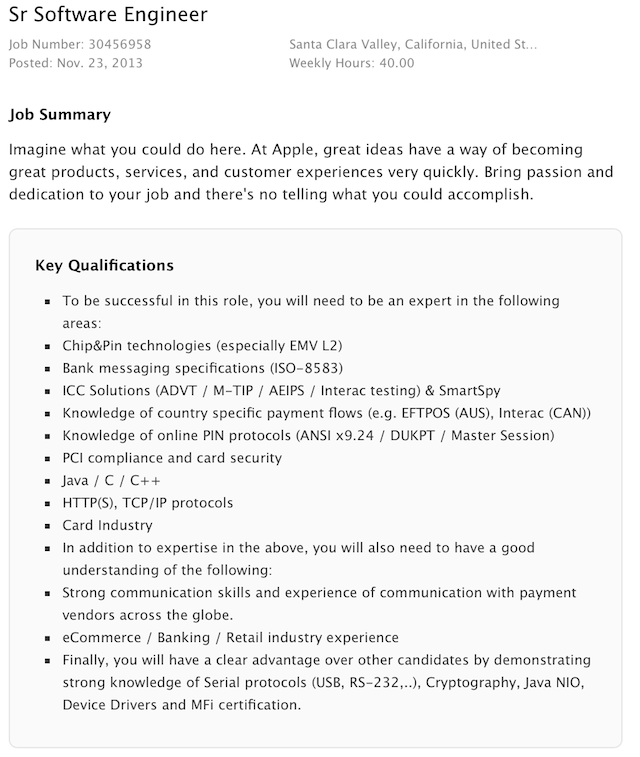 Currently, payments are processed at Apple retail stores with the help of a custom housing for iPod touch, paired with third-party hardware. Also, the Apple Store iOS app allows buyers to quickly scan and purchase accessories using their iPhones when inside an Apple store. But now, the company seems interested in developing a completely new payment processing system, for which it is hiring experts in eCommerce and banking retail.

“Apple is interested in experts in eCommerce, banking, retail, and card industries and lists various payment technologies including Chip&Pin, bank messaging specifications, country specific technologies such as EFTPOS (AUS) and Interac (CAN), and testing solutions used by Visa, Mastercard and others including ADVT, M-TIP, AEIPS, and Interac testing”.

You can check out the job listing at Apple’s website here.