According to The Information, Apple is serious about its video entertainment efforts, and executives recently held talks with former HBO programming head, Michael Lombardo, earlier this year, cites an unnamed source.

Another source familiar with the situation noted Apple has been trying to find a person to fill the head role. The search for a programming chief is a clear indication Apple seeks to create its own video entertainment for its massive user base. 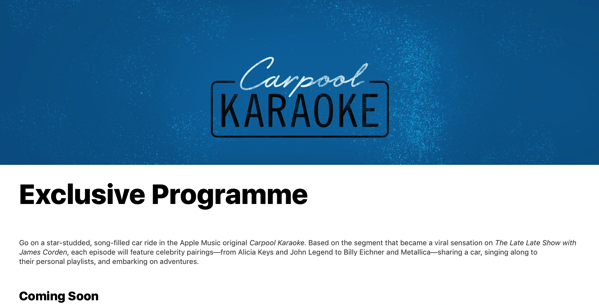 Apple has a new show coming called Planet of the Apps, which has celebrity judges help developers create hit apps, in a format similar to The Voice. Meanwhile, Carpool Karoake, which Apple acquired from James Corden, recently delayed its release until later this year. Both shows are set to be available exclusively for Apple Music subscribers.

Apple Music looks to attract more users by offering its own exclusive video content, produced by Apple, allowing it to be distributed worldwide to customers, without the traditional complexities of geographic content rights distribution. By making its own original content, Apple Music will follow similar footsteps of Netflix and Amazon Prime Video in offering exclusive content, only available to paying subscribers, worldwide.