Early this morning comScore released their 2012 Mobile Future in Focus annual report, that included notable mobile insights for Canada and other markets abroad like the U.S (with data from up to Dec. 2011). We’ve pulled the Canadian data from the report and the major stat here is Apple is set to dethrone RIM as the OS marketshare leader in Canada.

Already, the numbers are fairly close, but it will surely happen (if it hasn’t already) by the time another report is published. Last Fall, comScore noted the iPhone 4 was already the most popular smartphone in Canada (based on data up to July 2011). Here’s what comScore had to say about the Canadian mobile market:

Meanwhile, Canada also shows a very different complexion than most other markets due to the strength of the RIM/ Blackberry platform. In fact, with 32.6 percent of the market, Canada was the only smartphone market reported by comScore in which RIM still maintained the leading position. Also notable is that the iOS platform (31.2 percent market share) held a slight advantage over Android (27.8 percent). Symbian (4.5 percent) and Microsoft (2.9 percent) rounded out the top five platforms.

While RIM currently maintains the top position in Canada, the market dynamics are shifting and its hold is tenuous at best. Apple looks poised to assume the top position during the first few months of the year, though Android could surprise and get there first. Over the past six months, RIM has lost 6 percentage points of market share with most of it going to Android. It should be noted, however, that RIM’s January appointment of a new CEO likely signals some upcoming strategic changes that may result in more innovative product offerings. Should this change in leadership and enhancement in product offerings prove successful, RIM’s home market Canada represents perhaps the best opportunity to stem the tide and regain lost market share. 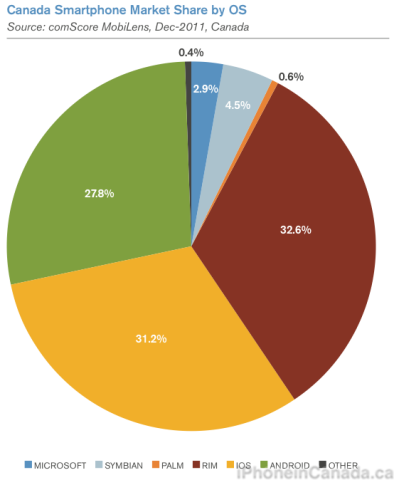 Here is some other interesting Canadian mobile data noted in the report:

Canada is tied with Spain and trails the U.S. in the percentage of mobile owners that also have a tablet:

Canadians like to send texts and snap pictures as their top 2 mobile activities: 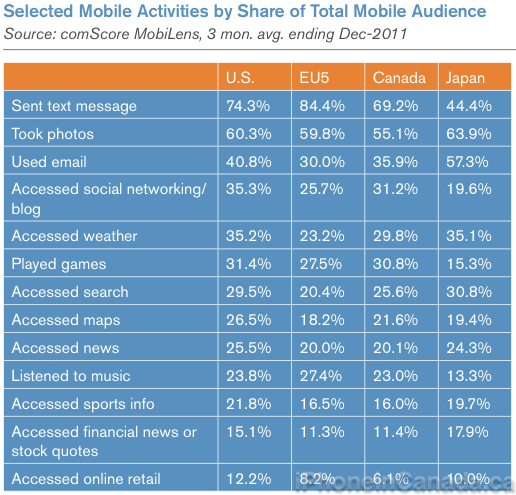 Smartphones surpassed regular phones in June of 2011 in Canada:

A breakdown of OEMs by share of the mobile market. RIM has a slim 1.4% lead over Apple: 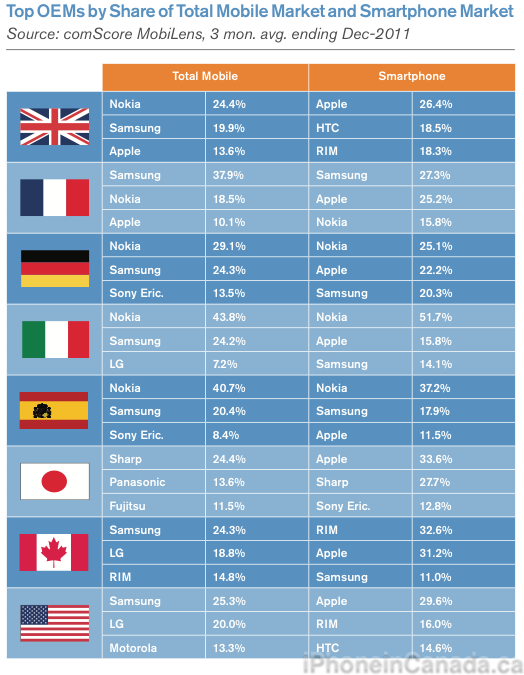 You can download and read the report here and bypass the registration (we did the heavy lifting for ya).