Amid renewed Chinese growth risks and trade tariffs on imports, HSBC has reduced Apple’s target price from $180 a share to $174, following which the iPhone maker’s shares dropped more than 3% in early trading today, according to CNBC News. 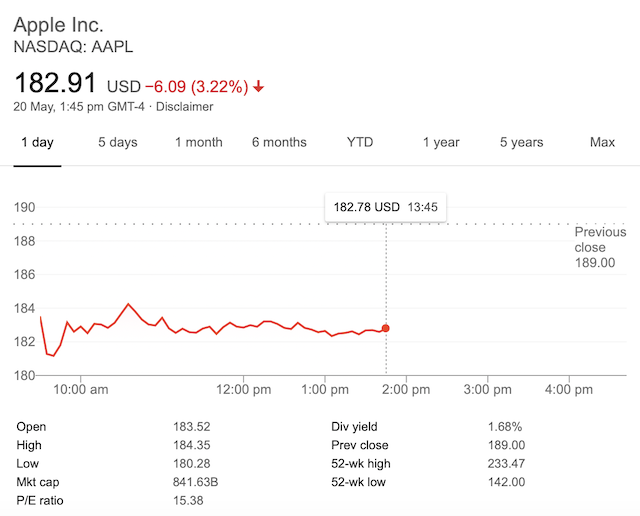 While retaining a “reduce” rating on AAPL, HSBC Global Co-Head of Consumer and Retail Research Erwan Rambourg said that recent tariff hikes on imports of Chinese goods into the U.S. could either force Apple to increase prices which would further drive down demand given consumer sentiment about recent iPhone launches being “too pricey.”

The analyst added that Chinese consumers could also accelerate the shift to smartphone substitutes by going to local brands like Huawei and Xiaomi:

The note also asserted that new services, and effective communication from Apple’s management to divert investor attention toward them, cannot compensate for the shrinking demand for Apple’s core iPhone product, another component in the trimming of price estimates.

Rambourg suggested that “cheering a quarter in which iPhone sales were down 17% at a time when the stock was trading at a three-year high in terms of forward PE (price-to-earnings) valuation we think is very counterintuitive.”

Apple has declined to issue a comment regarding the matter.

[caption id="attachment_389490" align="aligncenter" width="1400"] Image: Marcus Kane[/caption] As we count down the months to the launch of Apple's long-rumoured mixed-reality headset and, with it, an entirely new product category for the tech giant, we're starting to see more leaks and concept designs pop up. The latest concept renders of Apple's "Reality Pro" AR/VR headset imagine...
Nehal Malik
37 mins ago