According to Piper Jaffray analyst Gene Munster, Apple has significantly improved Siri’s accuracy under iOS 7, particularly in terms of properly interpreting the questions being asked, as the Cupertino company continues its efforts to further reduce its reliance on Google, MacRumors reports. 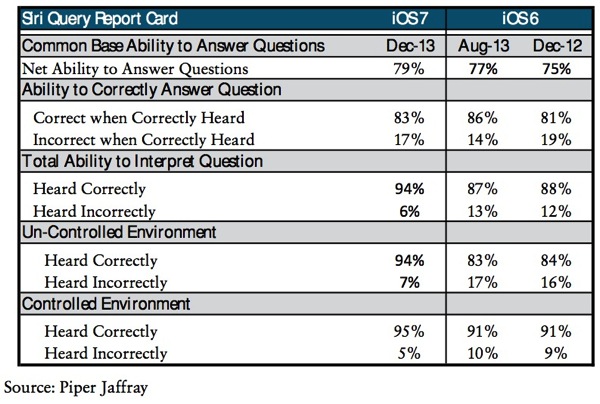 The analyst, who frequently assesses Siri’s accuracy in answering queries, notes that Apple’s intent to move away from Google are clearly reflected by Siri’s shift to emphasize Bing, Wikipedia, and WolframAlpha results. In his most recent testing, he notes that only 4% of Siri’s answers relied on Google, compared to 17% in August testing and 27% in December last year.

“The primary improvement between Siri in iOS 6 and iOS 7 came from its performance in noisier areas, where Siri was able to translate better through a noisy environment (94% vs. 83% correct in Aug iOS 6). Based on our testing, iOS 7 Siri’s net ability to answer questions (factors in questions not correctly understood) improved to 79% from 77% in August with iOS 6.”

While comparing Siri to Google Now, Munster found out that the two services are now tied in effectiveness with a “C+” score, after Siri held a substantial lead in the year-ago testing.