Following its Q2 2019 earnings report and an upbeat forecast, Apple’s stock saw a rise of over 6% during trading today, pushing the Cupertino tech giant’s market valuation back towards $1 trillion, Reuters is reporting. 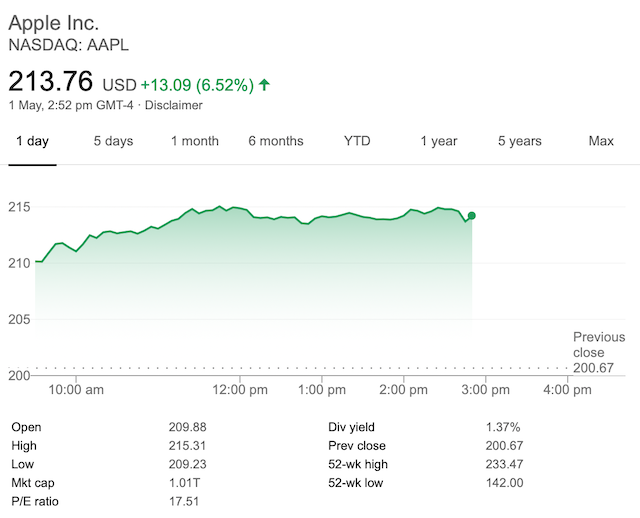 The company has been swapping places with Microsoft and Amazon for the title of the most valuable U.S. company as all three have passed the symbolic trillion mark during the past few months.

Shares of the company were up at $213.97, valuing it at around $986 billion, based on the 4.6 billion shares that its second-quarter report on Tuesday said were outstanding as of the end of March.

That pushed it ahead of Amazon, but just behind Microsoft in terms of market value, largely because the number of Apple shares has fallen steadily as it returns billions of its profits to investors by buying back its own stock.

“We believe Apple has locked up a strong share of the premium tier market and will continue to dominate high-end smartphones sales and capture the vast majority of smartphone profits for the next several years,” according to Canaccord Genuity analysts.

At least eight brokerages have hiked their price targets on the Apple stock with Jefferies making the most aggressive move by raising its target by $50 to $210.