As highlighted in a report by ArsTechnica, Apple is no longer offering iOS 14.8.1 security updates to iPhones running iOS 14 and is only showing them the option to install the latest version of iOS 15, currently 15.2.1. 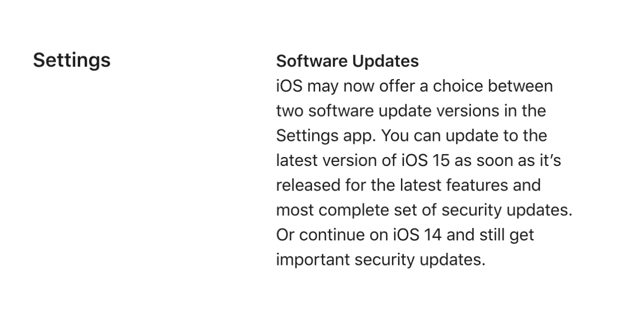 When Apple first announced iOS 15, it noted that the upgrade wouldn’t be mandatory for people who wanted to stick with iOS 14 and that they would keep getting security updates. But now, any iOS 14 user who wants the latest security updates will also need to accept the other changes in iOS 15.

Apple has told Ars that “it always intended the iOS 14 security update option to be temporary.” This would essentially give users a short grace period while Apple worked out new operating system’s early bugs.

“But Apple should have been upfront about that strategy if (as the company contends) it was the intention from the start. Users of older hardware and software shouldn’t need to guess, based on past precedent and tea-leaf reading, whether their devices will continue to be secure because they aren’t running (or can’t run) the latest version of the OS.”

Currently, all devices that can run iOS 14 are capable of upgrading to iOS 15.