We know there’s an Apple Store app that’s currently only available in the US App Store. This app allows you to make a Genius Bar reservation at any local Apple Store. But what about when you arrive at the Apple Store? Surely there must be an easier way to manage the queue of customers rather than listing their names on the big screen, right?

According to report from MacStories, the Concierge app that employees use got an update, and has been live since yesterday in stores.

Monday morning, the service went live for Apple Store employees. Employees have to utilize an app called Concierge that sends a push notification to him/her when a customer with a reservation checks-in to the Apple Store via their iPhone. In Concierge, employees are able check an iQueue that establishes the customers theyâ€™re waiting on and what times they checked in. A separate application called Scout gives managers the ability to establish room by room locations within the store for accurate, close proximity check-ins. Scout is a one time use application for the initial set-up of Appleâ€™s location based services.

As for customers, they will receive Push Notifications as they enter the store asking to check in. Relevant information such as waiting time, position queue, and even a photo of the employee you’ll be meeting with will be provided. Other features include being able to reserve a product for in store pick up. 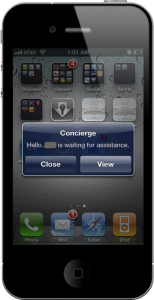 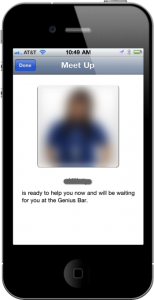 If this is indeed true, it will definitely streamline the whole Apple Store experience when it comes to getting support at the Genius Bar. It can be a mess at times on busy days with so many people “in” the store. Before this comes to Canada, we need the Apple Store app to show up in the Canadian App Store first.