On March 25th, Apple is set to hold a special event and unveil its video streaming service plans (and possibly debut AirPower as well).

The special event starts at 10AM PDT/1PM EDT at the Steve Jobs Theater in Cupertino, California, at the company’s Apple Park campus.

According to the session description:

Come join us at the Apple Store for a livestream of the Apple Special Event, hosted at the Steve Jobs Theater in Cupertino. We’re excited to watch some of the latest news from Apple with you on our video wall. 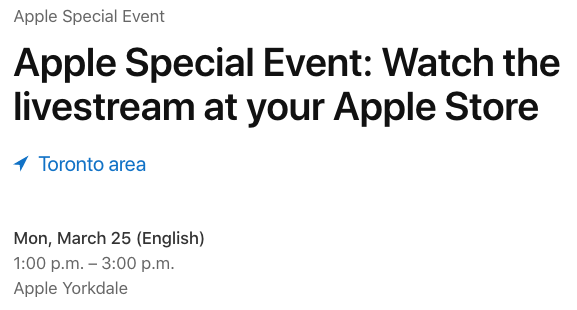 The event is set to last from 1PM to 3PM and will be available in English. Customers can sign up for the session online and also be reminded ahead of the event’s livestream.

Apple Yorkdale is located at 3401 Dufferin Street at Yorkdale Shopping Centre, located roughly 13 kilometres north of Apple Eaton Centre in downtown Toronto. It is the only Apple Store offering this session according to the list of store sessions we checked out on the web, as it has a 6K video wall, added last summer.