Anyone out there in Winnipeg reading this blog? If you are, then you probably already know that this Saturday, your city is going to be the lucky recipient of an Apple Store! Excited, yet?

Winnipeg is Getting an Apple Store this Saturday

Apple had a successful launch of stores in Vancouver and Ottawa, and it looks like the Slurpee capital of the world is destined to get theirs on Saturday, September 19th at Polo Park Shopping Centre.

Usually on launch days, Apple gives away free t-shirts to the first 1000 visitors. The website doesn’t mention it, but this will be the case at this massive 6000 square foot store. So get there early for your free t-shirt! Here’s the essentials you’ll need to know:

This grand opening will be Apple’s 13th store in Canada (three more are coming soon). It’s only a matter of time before there will be an Apple store in every major city in Canada. Vancouver will be getting its second store fairly soon at Oakridge Centre (lucky us!). No more paying for parking downtown baby!

Looks like someone at Apple made a little boo-boo. It seems that Winnipeg is a city in Alberta! Who would’ve thought! Take a look at the pic below: 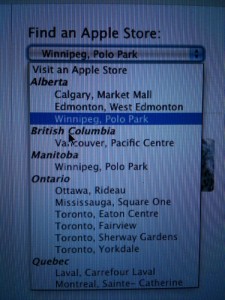 Anyone here going to be lining up on Saturday morning in Winnipeg with their coffee Slurpee in tow? 😉