We’ve seen extensive teardowns of Apple’s Lightning to 30-pin adapter which revealed there’s a lot of tech inside the tiny adapter. As for trying to purchase one, that’s a different story (similar to the Lightning to USB cable).

Apple.ca notes availability as 2-3 weeks, but some Apple Stores in Canada have started to receive stock of the cabled version of this adapter.

You’ve been sending us tips as where the adapter is in stock, such as the unit below (the cabled $45 version) which was available at the Halifax Apple Store (by our reader Graham). Other stores in Canada such as the Richmond Apple Store also have units in stock: 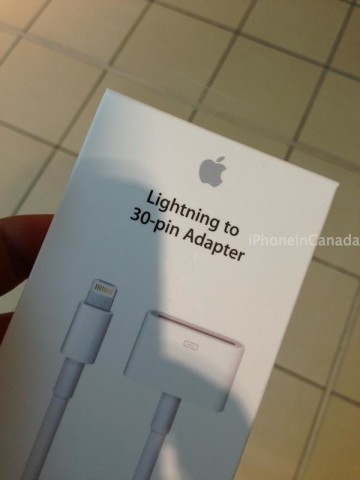 Have you been able to nab a Lightning to 30-pin adapter at a retail Apple Store or reseller (Future Shop has the adapter version listed for $39.99 online but it’s not available)? Let us know where and when in the comments.

Update: Clarified article to highlight the availability of the $45 cabled version, not the $35 standalone adapter which still is backordered.