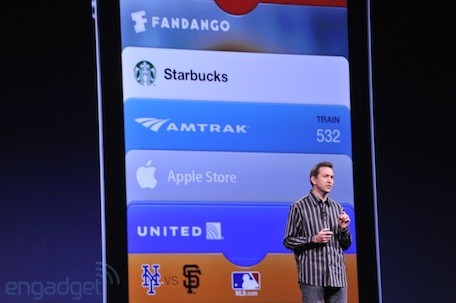 When Apple previewed Passbook at WWDC 2012, their own presentation slide revealed a Passbook card with the Apple logo, hinting at some sort of retail integration. Nothing has materialized yet but that could soon change, as 9to5Mac reports Apple retail locations could soon accept gift card payments via Passbook:

While Apple’s EasyPay software should be ready for Passbook this month, some sources noted that the current EasyPay hardware, at least at some retail stores, may not be capable of scanning iOS device displays. Presumably, Apple has a solution for this in the works.

Passbook shows the bar code of your tickets and coupons to allow them to be scanned. If iPod touch EasyPay hardware doesn’t have cut outs for the camera, customers wanting to pay via Passbook would not be possible–but that could change.

TUAW chimes in and notes their source tells them EasyPay hardware has been updated to allow camera access on iPod touch units:

We’ve heard from an unnamed Apple Store source that the company just finished replacing the cases on EasyPay-enabled iPod touches to allow use of the rear-facing camera. Previously, the EasyPay add-on blocked the lens, making it impossible to use the devices to scan something such as a Passbook card.

At this point, it appears Passbook integration at the Apple Store is imminent. I’m surprised it wasn’t ready at the launch of iOS 6 so customers could try it out immediately. Currently, developers are still trying to update apps to integrate Passbook. Check out our Passbook coverage here.