As noted by ifoAppleStore, Apple Stores are participating in World AIDS Day efforts, to take place on December 1st. Retail stores will focus their attention on (RED) products that contribute towards the AIDS fight in Africa:

According to sources, on Thursday a select group of Specialists will be wearing and promoting the (RED) iPod nano, with a portion of the $129/$149 price going to the Global Fund to fight AIDS in Africa. Also, managers and store greeters who normally carry iPads for work will have (RED) Smart Covers protecting the devices. On the product shelves, signs will promote the Beats by Dr. Dre Solo HD Headphones that are also part of the (RED) product line. There is also a special (RED) iTunes gift card available in the stores. Apple initially said 10 percent of (RED) gift card purchases would go to the charity, but now does not disclose how much of (RED) product purchases is donated to the Global Fund

As posted by @buckleup, the Apple Store in Sydney, Australia has changed its Apple logo to red for World AIDS Day: 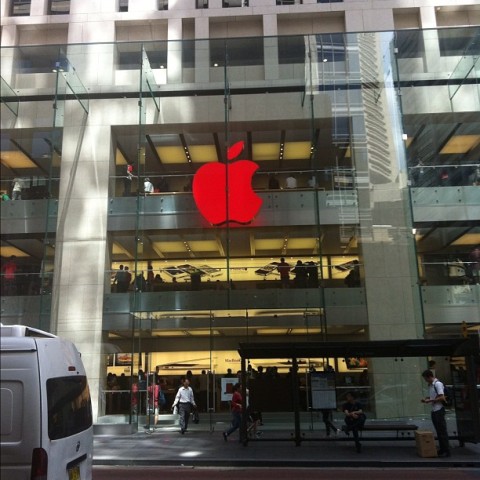 Product (RED) started in 2006, when U2’s Bono approached Steve Jobs for another collaboration. As revealed in the Steve Jobs biography, Jobs was never interested in philanthropy and opposed the traditional method of the campaign’s mantra to put company names in parantheses. Steve Jobs didn’t want to see something like this: (APPLE)RED. Walter Isaacson writes:

“I don’t want Apple in parantheses,” Jobs insisted. Bono replied, “But Steve, that’s how we show unity for our cause.” The conversation got heated–to the F-you stage-before they agreed to sleep on it. Finally Jobs compromised, sort of. Bono could do what he wanted in his ads, but Jobs would never put Apple in parantheses on any of his products.

So that’s how the Apple avoided having its name in parantheses for the Product (RED) campaign.

There’s no word whether other locations will follow suit–keep your eyes peeled tomorrow. That (RED) logo looks pretty awesome.

Amazon announced today it will stream 25 James Bond films on Prime Video beginning on October 5, 2022. According to the company, these 25 Bond films set to stream in Canada, the U.S., UK and other key territories is part of the 60th anniversary celebration of the iconic film franchise. Also coming is The Sound […]
Gary Ng
14 mins ago