Senior analyst at Cowen, Matthew Ramsay, has today said that Apple is struggling to get the necessary components required to build a 5G version of its iPhone, which the company is predicted to release by the end of 2020 (via Bloomberg). 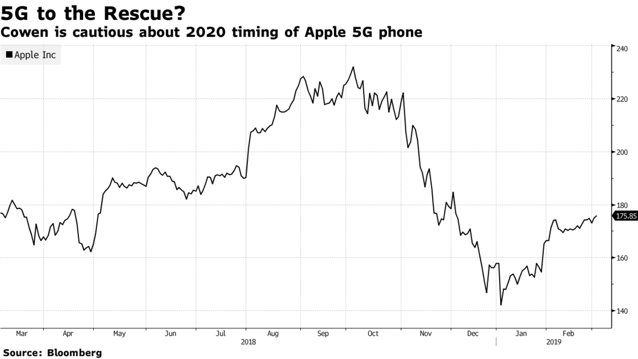 The analyst noted that Apple is in a difficult position given its reliance on Intel’s modem products, and while it has a bunch of options to deal with the situation, none of them is ideal. Referring to the Mobile World Congress, Ramsay said, “our industry contacts at MWC remained as surprised as we are that Apple is in this situation.”

According to Cowen, Apple could either launch a 5G iPhone 18 months after the competition “with an inferior modem from Intel likely without mmWave capabilities”, or simply source a 5G modem from chief competitor Samsung:

Using a 5G modem from Huawei is “off the table as an option,” Cowen told clients, while “MediaTek’s stack is too far behind in terms of timeline.” Apple could also settle its disputes with Qualcomm and revert back to its modems, but Cowen asked, “might it be too late already?”

The company’s fourth option would be to purchase Intel’s modem business and develop the necessary components internally. Cowen wrote that this was “a reasonable but expensive long-term solution.”

Analysts believe a 5G iPhone would greatly help Apple reinvigorate the sales of its flagship product.

Canada doesn’t even have 5G networks ready yet, so for Apple fans here, a delayed 5G iPhone may not be such a big deal (well, overages might be lol).