Citing people who have worked on acquisitions with the company, Bloomberg is reporting that Apple has been struggling for years to pull off bigger deals because of its reluctance to work with external advisers like investment banks, and inexperience in closing and integrating large takeovers. Analysts are now saying that Apple needs at least one big acquisition to reach its $50 billion revenue target by 2021, especially in online video streaming. 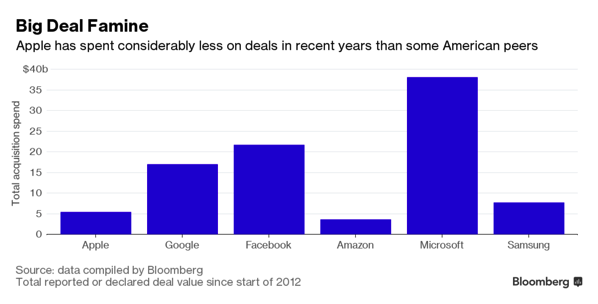 In 2014, Apple made its biggest deal in its 41-year history, buying Beats Electronics for $3 billion, while its second biggest is $400 million acquisition of NeXT Computer in 1996. In comparison, Facebook in its 13-year history, has made three acquisitions of at least $1 billion, including its $22 billion WhatsApp purchase. Similarly, Google has done four such deals, while Microsoft has completed at least 10.

Sanford C. Bernstein analyst Toni Sacconaghi believes that Apple needs at least one big acquisition in order to come up with the extra $13 billion in services revenue over the next four years.

Netflix Inc. ended 2016 with sales of less than $9 billion, so even buying that business may not be enough, the analyst said. Other potential blockbuster Apple acquisition targets include Walt Disney Co. and electric carmaker Tesla Inc., Baird analyst William Power wrote in a recent note to clients.

“They’re going to have to pursue something bigger than a Beats-like acquisition,” said Erick Maronak, chief investment officer at Victory Capital Management, which holds Apple stock among its $55 billion under management.

Apple’s deals team is composed of about a dozen people under former Goldman Sachs banker Adrian Perica, and most acquisitions take place at the behest of the company’s engineers.

People familiar with Apple’s acquisition deliberations also revealed that the company dictates terms and tells targets to take it or leave it, betting that the promise of product development support later and the chance of appearing in future iPhones are alluring enough.