Ever since Smart Cases for Samsung’s Galaxy Tab 10.1 were revealed, it’s just been a matter of time when Apple puts down the lawsuit hammer on the Korean manufacturer since just be looking at it, anybody could tell that the design was a total rip off of Apple’s iPad 2 Smart Covers. Even though Samsung claims that the Smart Cases (pictured below) never actually went on sale, we learn that Apple has just sued Samsung in Sydney, Australia over tablet and phone case designs according to a recent report by Bloomberg. The Cupertino giant has reportedly issued a notice of infringement that identifies 10 patents it believes the Samsung cases are violating. 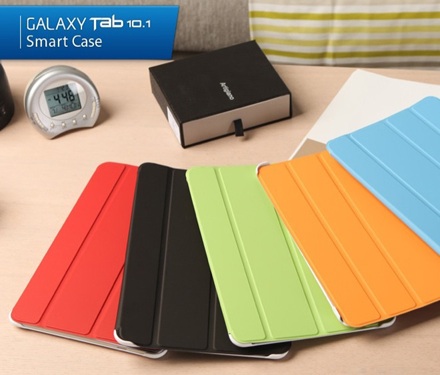 Apple issued the notice of infringement to Samsung in Australia over the cases, and will file a statement of claim, Apple’s lawyer Stephen Burley said at a hearing in Sydney today. Samsung’s lawyer Katrina Howard said at the same hearing the company was served with the notice that the cases infringe at least 10 patents.

The latest claims further expand patent disputes between the two companies that have spread across four continents. Apple and Samsung have filed more than 30 lawsuits against each other, according to the Suwon, South Korea-based company.

However, since the Smart Cases were never produced by Samsung directly, it is possible that Apple’s claims of infringement would relate to some other case design since Samsung currently offers several different styles of cases for its latest Galaxy tablet.