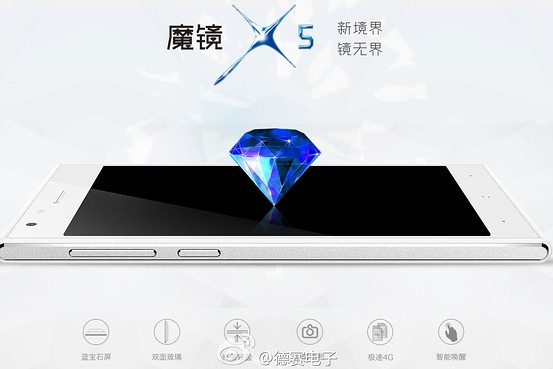 Chinese phone manufacturer Desay, who also happens to be one of Apple’s suppliers, has unveiled a new smartphone with an “unbreakable” sapphire display.

The Magical Mirror X5 smartphone features a 5-inch display, quad-core processor from MediaTek, 13-megapixel rear-facing camera, and 5-megapixel front-facing camera. The smartphone comes in at 6.95mm thick, making it about the same thickness as Apple’s iPhone 6 and 6 Plus.

The Magical Mirror X5 will be available on China Mobile, the world’s largest mobile carrier, for 999 yuan ($160).

“Sapphire has become a popular topic in smartphone industry after Apple and GT Advanced Technologies announced in 2013 a $1 billion plan to build an Arizona factory to produce sapphire. But Apple hasn’t used the super hard sapphire in its latest iPhone 6 as GT failed to mass produce the material and has filed for banktruptcy.

In an effort to differentiate their products in an increasingly crowded smartphone market, some phone vendors have adopted sapphire screens in their smartphones since last year, including Japan-based Kyocera ‘s Brigadier and China-based Huawei’s Ascend P7 sapphire edition.”

Huizhou-based Desay has been included in Apple’s supplier list for 2014 and the Chinese manufacturer has listed Apple as a customer.

It is still unclear whether Apple will eventually include a sapphire display on the iPhone. However, it appears that manufacturing yields for the sapphire display wouldn’t meet Apple’s high demand at the current time.