When the head of automation technologies, Sal Soghoian, departed Apple, and the whole unit inside the company was closed down, some feared that useful features such as Automator and AppleScript would disappear from the operating system. Apple executive Craig Federighi reassured fans that they won’t.

In an email shared with 9to5Mac, a reader asked Federighi about Apple’s future plans for the macOS automation features. The exec replied that Apple has “every intent” to continue supporting these features. 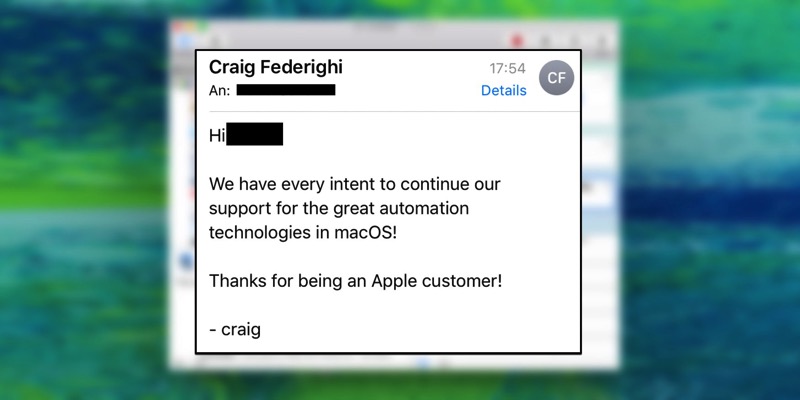 Those using a Mac may already know that Automator, for example, is a functionality that lets you automate actions on your computer. With Automator you can skip learning complicated programming or scripting languages to create automations: you can use any of the hundreds of actions available in the Automator library to create workflows.

Although Soghoian and his team are out, Federighi’s reply reassures worried automation fans that Apple will at least support automation workflows, but, as 9to5Mac points out, that doesn’t necessarily mean that future updates will be available.

There are other automation tools available for iOS, such as Workflow, and there will always be a third-party app to enable automation. It’s nice feature to have, and those using it frequently would find it hard to let it go.