Apple’s record holiday quarter sales have helped the company retake the pole position in the global smartphone market from Samsung, reports Gartner (via CNET). By the end of calendar 2014, Apple owned more than a fifth of the global market (20.4%), though Samsung was close, it had 19.9%, the market research firm highlighted.

Between October 1 to December 31, 2014 Apple sold 74.8 million iPhones, achieving the best quarter so far. This was predominately driven by the huge demand for the first ever large-screen iPhone 6 and iPhone 6 Plus in both the US and China, which showed 88% and 56% growth respectively. 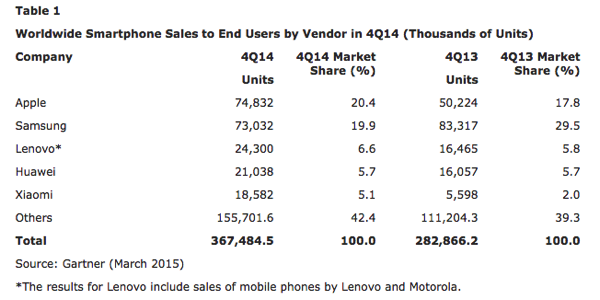 “With Apple dominating the premium phone market and the Chinese vendors increasingly offering quality hardware at lower prices, it is through a solid ecosystem of apps, content and services unique to Samsung devices that Samsung can secure more loyalty and longer-term differentiation at the high end of the market,” said Roberta Cozza, research director at Gartner.

The Gartner report adds colour to an earlier Strategy Analytics release, which revealed Apple and Samsung as being head-to-head: both controlling a fifth of the global smartphone market. While the iPhone 6 was certainly a hit, this wasn’t the only contributing factor to Apple’s success; Samsung was hit by competition from low-end manufacturers such as Xiaomi.