According to the latest Strategy Analytics research report, Apple topped all smartphone vendors in 2011 Q4 with the most shipments, toppling Samsung. Apple won the quarter but the South Korean conglomerate still took down the 2011 title by edging out Apple by 4.4 million shipments. 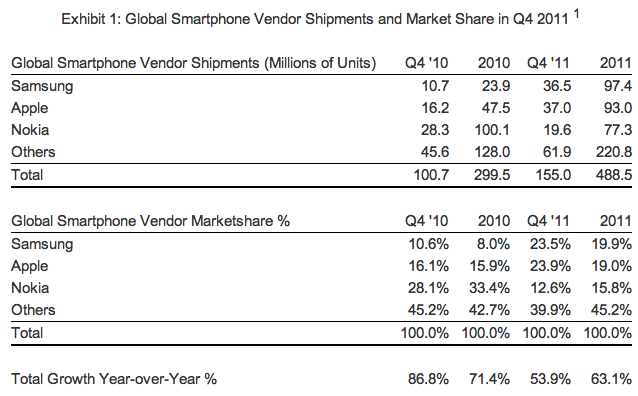 Neil Mawston, Executive Director at Strategy Analytics, added, “While Apple took the top spot in smartphones on a quarterly basis, Samsung became the market leader in annual terms for the first time with 20 percent global share during 2011. With global smartphone shipments nearing half a billion units in 2011, Samsung is now well positioned alongside Apple in a two-horse race at the forefront of one of the world’s largest and most valuable consumer electronics markets.”

Apple sold 37 million iPhones in Q4 2011, edging out Samsung barely. It should be noted Apple’s huge success in China this month wasn’t part of Q4 numbers.

The competition is heating up as Samsung’s recent 2011 Q4 earnings were equally impressive, with a $42 billion dollar quarter (versus Apple’s $46 billion). These competitors have quite the complex business relationship, don’t they? Throw in supply chain sales and lawsuits, and you have the most intriguing partnership in the tech world.